A Review of Witches in the Tinderbox: The Succubus Realm by Richard Mikolitch

A Review of My Best Friend is a Succubus Book Four: Rising Heat by Amanda Clover 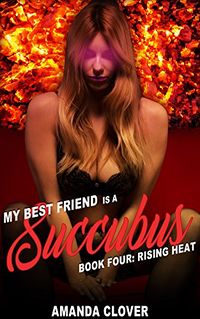 My Best Friend is a Succubus Book Four: Rising Heat by Amanda Clover

The work has been somewhat uneven throughout, not seeming to find its way from time to time. That’s not to say the story itself doesn’t have promise or the characters aren’t interesting. It’s more that the work drifts from idea to idea, moment to moment, not finding the way towards the core story.

The fourth work, which I’ll review today, is somewhat lost as well, but towards the end manages to draw Faith, the main character, towards developing her character, if few others do. It’s a shame, really, because the characters have stories to tell and when they are, the series is a far better read overall.

With a succubus as a best friend, can life ever return to normal for Faith Granger?

Faith Granger’s best friend is a soul-sucking demoness named Morgana. After rescuing her from the clutches of religious zealots, Faith and Morgana head back to school and try to return to a normal life. But Faith’s father is still missing and a succubus queen has taken an interest in Faith’s budding power as a sorceress.

Faith and Morgana face unexpected dangers, realize new powers, and indulge in steamy pleasures. Will Faith realize her full potential as a sorceress? Will she find love with Morgana? Will she find her father?

Faith’s life hasn’t been the same since Morgana came into her world. Knowing more doesn’t always mean making the best choices and so far some of the things that Faith has done haven’t quite worked out as well as she’d like. Still, Morgana is there to help, her friends are with her. But when another threat comes calling, Faith needs to have faith in herself and make the most important choice of her life… so far.

The work follows on immediately from the prior work in the series and as such Faith’s problems are mounting. At the same time, she’s discovering what her magic is capable of, the power that Morgana has, and just how complicated things are when your thoughts can’t quite turn away from the succubus that’s part of your life.

There’s a wonderfully fun scene at the beginning which just brought everything into focus, how overwhelmed Faith is, but as well, how lost Morgana is. They need each other and that need makes for some telling moments between them. But it also provides for some truly hilarious moments that made me smile.

There is a scattering of erotica in the work that I thought didn’t overcome the telling of the story. The succubus aspects are delightful and with the appearance of a new succubus in the series, there’s a bit of succubus mind control that was really well done and I enjoyed. However, while Ashara, the main problem for Faith and Morgana, doesn’t appear, the appearance of Shaelyn, a succubus who is almost, but not quite stereotypically evil, is both a surprise and a disappointment. It’s a fleeting glimpse, but it offers the promise of her return. With some luck, that return will be more than her being a sledgehammer for her Mistress than she was in this first appearance.

The development of the core story is more central to things, it pushes Faith to make a choice, seek help, and discover what she’s truly capable of. That leads to a lovely and hot dominance/submission story that I think worked well, revealed a lot about the characters involved and wasn’t too silly or over the top. It had meaning, to all three involved, and it seems like, somehow, that will matter in the future.

There’s still a lot of questions left unanswered and a few new ones came to the fore as well. One of these, at least for me, is about a certain librarian and the thought that she might, in some way, be connected, or be, someone else. If so, that’s a twist that could play into something I’d like to see. That said, it’s unlikely, but given the story so far, I could almost see that connection being the last dagger that is thrown at Faith’s heart and soul.

The editing is much better in this work than what came before, there only being a few minor points where the dialogue or the grammar seemed somewhat off. Faith’s character develops greatly, Morgana far less so, even if some of her moments did make me smile. The main point is that the story turned back to the main plot, pushed things forward, even if slightly and that helped. It might be nice to sharpen the focus more, perhaps let there be a little less wandering and a little more story of why things are, what it all means, and in the end, how Faith connects to it all.

Overall, there is a lot more story and character development which I enjoyed. Faith isn’t so much the lost little thing she’s been through much of the series and that adds quite a lot to the series overall. Morgana is still a mystery for the most part however, and there really needs to be more time spent in opening her past, the connections she has, and what, in the end, she wants. Beyond that the threats the two face seem to be getting worse, building towards something that will either be very fateful or very tragic.

The latter I think would be a shame, especially at a point where there is still a lot more story to tell. The threads are tightening, however, and there will come a reckoning. I find myself wondering just what will happen when Faith has a choice to make, one that might cost more than a life, it could cost her very soul.