Succubi Image of the Week 488

A Review of Second Chance Succubus by Siobhan Muir

A Review of Seduced by the Sex Demon! by Veronica Sloan 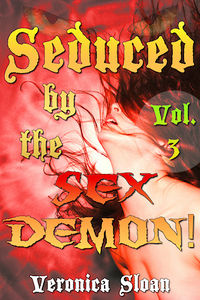 Seduced by the Sex Demon! by Veronica Sloan

Last year I reviewed the first two works in a series by Veronica Sloan called Seduced by the Sex Demon. You can find my first review of that work here on the Tale and the second review can be found here as well.

The prior works in the seres didn’t really appeal to me very much because it seemed like there was more focus on the sex scenes than there was on developing the characters, most especially Tanya, the main female character. There seemed to be something missing in not exploring her character further, to go into the choice she made and what came from that point.

Recently, the third work in the series was released and I wasn’t expecting things to change very much, if at all. However, the author took the series in a direction that I’ve been wanting to see, pushed deeper into Tanya herself, and in the telling of that story turned the series towards a simple question.

What happens when you can’t get what you want, and know there’s only one way to get it? Is it worth your soul to find relief and in doing so, what is the cost you have to pay?

Three years ago Tanya made a bargain with the incubus that possessed her step-father: Give up good sex in exchange for Jeff’s soul. It was a noble sacrifice but one she soon regretted. Tanya is young and beautiful, and knowing she can never reach orgasm fills her with lustful obsession. When the demon returns to offer her a new deal, she unwittingly sets down the path of becoming a demon herself!

Tanya made a choice, one that she believed was for the best and for the greater good. But over time that choice has been eating away at her mind, body and soul. The need never leaves her, there’s only a single choice that will give the pleasure she so desperately craves. But in making that choice her good intentions will only place her on the road to hell and beyond.

The work focuses on the aftermath of Tanya making the decision she did at the end of the prior work in the series. Much of the story is spent on her trying, in all sorts of different ways, to scratch an itch that she just can’t. The frustration is palatable in her, it’s heavily weighing upon her and regardless of anything she tries, she just can’t find the way. The scenes themselves tend towards being slightly pornish in tone, a bit short of being erotica, but unlike the prior works in the series, it isn’t sex for the sake of it, but instead there’s a development of Tanya’s character, her needs and the cracking of her will. It builds towards a critical point in the work and when that comes, Tanya comes to make a telling choice.

The incubus of the series returns, still without a name, but reason for that finally is given and it makes complete sense. It’s a plot point that matters and it pushes Tanya towards an encounter that makes up the latter part of the work. It’s the story after Tanya makes her choice that pays off so much of the series before. The incubus has a plan, Tanya is part of it and how that develops, what changes within Tanya just in this work alone, brought a far better story.

Within the second half of the work, there’s a shift in tone, a change in focus, but most of all, there’s a reveal about Tanya’s past and a connection she has, that gives rise to a larger, more telling story than the prior works. In doing so, her character gains depth, I cared about her more and the story became delightfully complex.

It’s clear, once the incubus has what he wants. what his plans for Tanya are and rather than just having things happen in an instant, the story makes little things happen here and there, Tanya’s personality and emotions are shifted, slowly, and while it is very slight overall, it presses again Tanya and what she believes in.

The battle between her needs and her humanity is very well done, more so when the focus of her mind, body and soul, has their own needs, wants and desires. There’s more of a relationship between Tanya here than was with the characters in the priors works and I thought that was really surprising. It’s that connection, that shift from sex into erotica that made this work much better a read and something that I wanted to see what happened next most of all.

While much of the work tells of Tanya’s frustrations, it’s not used as a throwaway telling. There’s a point to it all and when that is played out, and her nemesis appears, it makes sense. But it also serves to open the series to focusing on the battle within Tanya, of making a choice and trying to overcome the darkness within her. That offers some real opportunities in describing how she changes, what she becomes and how that alters her world. If that comes in the next part of the series, there need not be sex for the sake of it, but as in this work, erotica that matters to the storytelling.

That, for me, makes for an interesting story and it’s nice to see that this author has turned their attentions towards storytelling and not the sex alone.