A Review of Seduced by the Sex Demon! by Veronica Sloan

A Review of Second Chance Succubus by Siobhan Muir 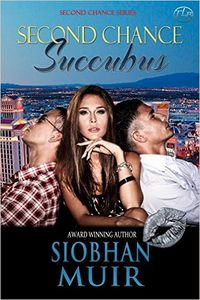 The mysteries which envelope a character can be, in many ways, more important than the overall story at times. That can be, for the most part, simply a question of whether what is told is the whole story or if there’s something left waiting in the wings. Each character has their own flaws, problems, wants and wishes. Sometimes, however, it is the fear within that is the most telling thing of all.

The singularly most difficult theme to write about, and do so well, is that of a D/s relationship. Far too often the truth isn’t told, or the reality is bent or twisted to the point where it destroys the story as a whole. But sometimes it can be told well, expressed in the right way, and gives voice to a simple truth.

Everyone deserves a second chance…

As an ancient succubus, Lady Aislynn is cursed to survive off sexual energy for eternity. To live without killing, Aislynn runs the Underground, a pleasure club in Las Vegas where she safely feeds on the ample eroticism of her patrons. A murder inside her club threatens the haven she’s built, even as it brings unwanted attention—and possible salvation—in the form of two handsome brothers, both in search of the truth.

Werewolves Chayse and Nik Wolffe haven’t seen each other in five years, and the last place they expect to cross paths is a strip club. The detective and PI find their cases intertwining around the enticing Aislynn and her club. Nik may believe in Aislynn’s innocence, but Chayse knows all too well the destructive power of a succubus. He’s determined to keep himself and Nik free of her spell.

Nik’s missed sharing lovers with his brother, but Chayse seems dead-set against reconciling the past or building a future. Luckily fate, and the Goddess, may have plans for the two embattled werewolves and the succubus with love enough for them both.

The past haunts three souls in different ways. One is haunted by pain, another by loss and the third by a mistake lost to time. For Aislynn, that past haunts her, every day and it seems that she’ll never find what she needs as a succubus in another soul. But what happens when two souls bring about possibilities? Is the risk and fear crippling or can she overcome, along with two souls in pain, and find what’s been impossible?

The story fixes on the needs of the three main characters, the search to overcome their past, their pain and their needs. There are deeply heartfelt moments, shattering loss and aching pleasures to be found for each. But none of it comes easy, it is a battle and it feels right as the story unfolds.

The twins relationship, how each has been harmed by things in the past, is dearly felt through the work and it is a real struggle for both of them to come to terms with what they discover in each other and within Aislynn herself. The character development that comes from that leaves all of them changed, in many ways, but more so, there’s a real feeling of being somewhere more than they were at the beginning and in better ways.

Aislynn, the succubus of the work, is a delight, I loved her attitude, her flaws and her needs. She isn’t what one might expect a succubus to be, and really that’s core to this work. That difference, that need and choice made by her makes it more complicated for the twins to overcome their own issues, but when that comes to pass, the heat is wonderful.

There is, however, one achingly missing part of the story and that comes to Aislynn herself. She’s a wonderful character, a loving Domme, an inspired succubus that cares and needs to be so. But she also has a secret and when that comes out, it’s an amazing revelation, one that was exactly right in so many ways. The problem is that truth leave a huge mystery and story not told and I really wish it had been more than it was. There are some hints, a little bit of truth told, but there’s so many questions left about her and I dearly wish there’d been time taken to explore them.

Well written, a delight to read with heat that simmered throughout. The characters are amazing, the world has so much to tell and I loved it dearly for being faithful to the D/s relationship. I just really wanted to know more about Aislynn than the veiled hints that came through.

I really wanted more about Aislynn than what the author revealed about her. While so much was a delight, the little teasing about her past just made me ache to know so much more. Her secret, when revealed, was wonderful and fit so well, but then it opened the door to so many things to ask, but never were.

Overall however, that missing part of the story doesn’t detract from the wonderful understanding of what a D/s relationship is. That alone makes this story powerful and faithful to the characters and the world they exist within. It is a wonderfully complex story, a telling understanding of the needs of those that have a need and find the one to share it with.

To my surprise there is a work prior to this one in which Aislynn makes her first appearance. I wasn’t aware of it when I read this work, and I’m sure my view of her as a result might be a bit altered as a result. We’ll see how that plays out when that work comes up for review.