A Review of Ritual Love by Julie Law 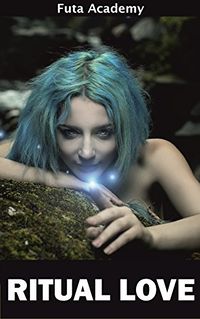 Sometime ago I reviewed the first work in the Futa Academy series by Julie Law, and you can find that review here on the Tale. What I particularly enjoyed about the work was the storytelling which wasn’t overcome by the erotica. The balance was more towards the characters, the situation and what happens than it was to the heat of the erotica. The second work in the series was released recently and I’ll be reviewing that work today on the Tale.

The past matters in that it shapes out needs and desires, but also gives form to our fears. Sometimes the hardest thing to admit isn’t what we know to be true, but rather it’s being able to express that to the other that needs to know. Getting past that flaw within oneself can be more than life-changing, it can change everything you thought you knew about yourself.

Gretchen is happier than she has ever been, but sometimes she has difficulty putting into words why. She knows Amabel is responsible for it, but she had plenty of lovers before and none made her feel like the blonde does.

She refuses to call it what it is, refuses to accept the feelings beating in her heart, and tries to bury her head in the sand, but when Monique makes her a proposal she can’t deny, she’ll realize what she’s truly feeling.

In the aftermath of Amabel choice to defy their headmistress, Gretchen finds herself trying to come to terms with knowing that Amabel loves her, but she can’t seem to find it within herself to admit the same. But the affairs of the heart will come to blows with Gretchen’s succubus realities, one way or the other.

The work follows on from the prior work in the series, but unlike what has come before, there’s less in the way of telling of what’s happening around Gretchen than there is dealing with her own feelings and the internal monologue that comes from that. It’s very much a character development moment with some light erotica to draw both Gretchen and Amabel to opening themselves to each other. It’s that connection which makes things dearly interesting overall and shifts the focus from the larger plot to the characters themselves.

The plot isn’t really moved further along, there’s not that much in the way of dealing with what Amabel and Gretchen have learned or the consequences of their actions. Much of the story is taken with Gretchen trying to understand Amabel and how complicated their relationship will be. There are some dearly tragic thoughts within that, something I hope doesn’t come into play, but that presses Gretchen to realize there is such a thing as love, and it’s there in front of her.

Gretchen has a real issue with coming to terms with that and much of the problem is her succubus nature and her own past. Unlike Amabel, who a great deal is learned about, Gretchen’s past isn’t told well. There’s some skimming over about her, much of which is simply the moments that come in the work. Still, there’s questions left unanswered, and more created, which would have been good to delve into during the intimate moments at times.

Being that the focus is on Gretchen and Amabel’s relationship, really nothing else moves very much. The headmistress is not seen, there’s not much in the way of classes continuing and so on. It’s strictly set aside, save for one of their roommates appearing and making an offer to Gretchen. That offer brings about the climax of the work and the entwining of the main characters that I’ve wanted to see. The first work opened the possibly, the second made so much more possible.

The character development is very good, the overall plot was, to a point, forgotten, but what came otherwise made that not so much an issue. The erotica is warm, loving and most of all, allows for the characters to come to terms with each other, to understand, and that was what I loved the most here. I just wish that in return for what Amabel revealed that Gretchen could have done the same. Gretchen is a succubus, we know that about her. We also know she’s not what she’s expected to be, but not why. That’s the story that still awaits to be told.

The development of Gretchen moved really quickly, but even so there’s a great deal of introspective moments as well. It’s a far more emotional story, making the connections between Gretchen and Amabel turn in a direction that needed to be, to open more of who Amabel is and her past. That said, Gretchen is still somewhat a mystery, or at least still trying to find herself. It’s that part of this series that I’m waiting to see unfold.

There’s still quite a number of plots to unravel, certainly there’s the threat from above that’s hanging over Gretchen, among others. The complexities of the story have a long way to go and it seems like things won’t become any clearer for a while. If Gretchen’s development, not just as a succubus, but the core character of the series, continues, that story will offer a lot.

I’ll hope that the next work in the series continues to focus upon the story most of all.