A Review of Seduced by a Demon by Rick Mann

A Review of The Incubus’s Kiss by Bree Branigan 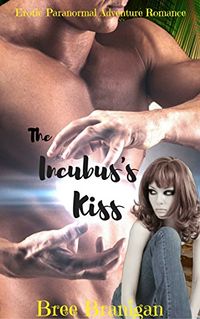 The Incubus’s Kiss by Bree Branigan

The thing about some works is that the story that isn’t told is so much more interesting than the story that is. Touching on events seen “off-screen” leaves a lot of questions needing to be answered. More so, that story untold actually matters to how the main characters relate to each other. Skimming over things for the sake of some heat doesn’t make for a good story, it leaves a lot to be desired.

Offering a world in which succubi and incubi exist, that there was a deal made with them, that’s really interesting. Avoiding the story that offers by focusing on the main character being unsure and lost within herself is a bit disappointing. It’s good to understand why things happen as it is to show what happens. The connection matters as much as the connection between the main characters themselves.

He’s a diabolical demon. Yet she has never felt so warm, protected and loved. And he wants her. Can she stay? A thought-provoking erotic paranormal romance. When Kendra, a feisty PI, arrives on a Caribbean island in search of the mysterious Xabiere, she becomes part of a troupe of serf-maidens hoping to become brides of the sexy, rich incubi that inhabit the island. Before long Kendra is thrown into the Demon Prince’s lair. He has ravaged her, yet protected her. Kidnapped her, then offered her freedom. With him she feels more at home than ever before. He begs her to be his bride. Lust and sensual pleasure overtake her. She longs to surrender. What do you do?

Kendra finds herself trapped in a world where demons exist, they seek humans for their needs and it seems that one of them has a need for Kendra herself. But the past hides something and it haunts her with every waking moment. When the truth is revealed, it isn’t just Kendra that discovers the truth, it’s the Demon Prince himself as well.

While the book length appears to be well over 700 pages, the work is actually a collection of various stories by this author, the first being the work I’m reviewing here. As such, this story is actually about 90 pages or so. The thing about this work is that it offers a setting and characters tat offer something really interesting to tell, but that story doesn’t really come out past the main character trying to figure out herself.

There’s suggestion of another world of succubi, incubi and other beings which is mentioned in passing, actually is important to the main plot, but isn’t delved into. There’s talk of a deal being made with them, but that’s not talked about much. There’s a pressing tone to the work that doesn’t allow for much in the way of character development beyond the main character herself. It is brutal at times, occasionally bordering on being lost within the things that happen to the humans who are existing with the incubi. There are moments in which Kendra is sort of dragged from encounter to encounter, something happens and then there’s not really a point to it.

That disconnect has a lot to do with Xabiere, the incubus of the work. He doesn’t really break out into a character that a lot is leaned about. His actions aren’t always clear, his mood shifts, there are truths he holds, tells and then are forgotten. From one moment he is aloof towards Kendra, the next he’s trying to help her. But in the end he almost always resorts to using his powers to “smooth things over” and then a lot of story and character development is lost. Similarly, he speaks of the world he’s from, tells little hints about it, then the story rushes onwards to the next moment in which things become stranger still.

There’s a lot of handwaving to get past some difficult questions in the work, and that takes away from the story. Events come and go, not always connected, and as that happens once again the change for expanding the characters, telling more of what’s going on, doesn’t happen. There’s one point where something happens, it’s important, and it needs explanation, but it doesn’t come. It’s a critical point in the work, it changes a lot of things, but it’s over in a moment, the story moves on and that’s a shame.

There are other characters that are succubi or incubi as well, and they are really shadows to the story. They appear for a moment, do something to Kendra, then they are gone and she’s left confused, angry or frightened. While there’s a point to that, sometimes, much of the time it felt like a quick answer to moving the story off in a needed direction as quickly as possible. There are relationships, some good, some opposed, but they aren’t shown well in the work. At many points there is conflict between Xabiere and the other beings like him, but instead of using that conflict to expand the story, they move off the page, and there’s nothing more said.

Overall, the problem here is just not expanding the story beyond the main character. There’s an offer of more to be told, but if it has nothing to do with Kendra, then it gets glossed over, pushed aside, and as quickly as possible. The climax of the story as well has the same feeling, mainly that it is all about Kendra, even as what’s happening is more about Xabiere’s world. It’s really a good point in the story, it tells a lot. But it just doesn’t give the depth I’d like to have found.

The erotica in the work has some heat, but overall I didn’t find much that interested me in it. There are some aspects of mind control as well, and they are actually well done, but they are fleeting and too quickly passed by. At some points its a bit jumbled, needing focus and, in a lot of ways, seeking itself and not finding what it’s looking for.

The conclusion of the work was disappointing as well. After all of the story that came before, there’s a jump to the ending. That ending could have been something really heartfelt and involved. It could have allowed for the character development I wanted in both Xabiere’s and Kendra’s characters, but it didn’t happen. Two short pages don’t provide a good, satisfying ending to the work, but considering the balance of the story, it’s not that much of a surprise.

There’s really not much in the way of telling about Xabiere’s background, too many details are skimmed over as well. There’s a world here, an interesting one, but rather than expanding on the subplots, and there are a lot of them, they get skimmed over by the main characters both being in an awkward situation. The events around them rush by, unexplained, and I didn’t enjoy that being so. The heat that comes in the erotica wasn’t enough to hold me to the story.

There’s story here, a lot of it, this work could be expanded easily into a series of works, just from the subplots, the minor characters that pop in and out, and then events told elsewhere that aren’t expanded on. It’s something to consider at least. Tell the story around this story, there’s a lot there to be told.