A Review of Raising Cain: A Succubus Always Gets Her Man by Jerico Knight

A Review of the Souls On Fire series by Piper Hayes 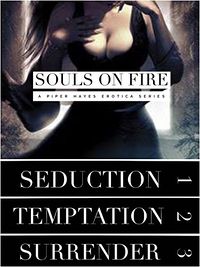 It’s a delight for me when I come across a series in which the characters are more than “just succubi”. More so, when the characters have depth, emotion, hopes and a past, that level of storytelling give rise to some of the most wonderful tales by far.

Most of all, having a glimpse of the struggle within, of holding the darkness at bay tells more about a character than just having them fall into a sex scene. Allowing the characters to tell their story, express their hopes and fears brings about something wonderful. The emotional attachment matters and when the erotica comes into play it’s all the more hot and sweet too.

Tormented by her dark side, Lilith refuses to conform to the ways of her own kind. As a succubus, she is the ultimate seductress, but since relocating to New Orleans, she is the one being seduced – by a life she can never have. Or can she?

Follow Lilith as she awakens to a vulnerability, and emotions she never knew existed, making it harder than ever for her to resist the primal urge she fears most – turning dark.

A story in three parts that tells of Lilith, a succubus who believes there’s something more of her to be found. An encounter with a soul that tempts, calls out to her, asking for her to come and just be. A moment of passion that turns, changing the life of another, pressing upon Lilith to be something even more than she is. A way out of the darkness for her kind and for herself.

While there is some background about Lilith, a smattering over Grace and Jake, it is enough to set the groundwork for telling their stories in a very fulfilling way. I did want to know more about the succubi in this universe than was revealed, but it wasn’t really central to the series overall. Still, it’s a missing piece of the puzzle that left me wondering about a lot of things.

While there is darkness, it lurks, not overpowering the story overall. A threat, a memory, a pressing concern which drives some tense moments onwards. But at the same time there’s heat through the succubi in which the darkness, though sometimes barely controlled, gives way to the attraction between them all. A complex collision of emotions, but then the story itself is complex and so this needed to be.

Achingly wonderful, steamy heat and characters that had souls. An amazing story, one in which I wish each part had been longer, the story told more fully than in the flashes of brilliance there are. The ending is a bit melancholy, but at the same time very fulfilling as a reader. I do feel like there needs to be a fourth part, to tell of the after. To explain Grace’s next steps, Lilith’s future and that of Jake. So many questions left open needing to be touched upon. Perhaps someday that will come.

I really feel like this series needs a fourth part, there being only three in the series. The ending is all that I hoped it would be, but then it leaves so many paths untouched that one more to close some of them, to bring about perhaps more of why things are as they are would be good as well. I loved that Lilith wasn’t stereotypical, and that the story didn’t take the easy path to the ending. Captivating, hot and delicious. All wonderful things in Succubi stories by far.