A Review of the Souls On Fire series by Piper Hayes

There’s a possibility in this wig I think…

A Review of Raising Cain: A Succubus Always Gets Her Man by Jerico Knight 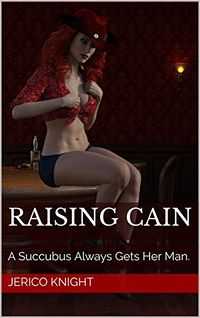 Raising Cain: A Succubus Always Gets Her Man by Jerico Knight

The story of Lilith brings with it a lot of interesting questions to think about. There’s one particular aspect of her that, for the most part, really isn’t quite touched upon as much as I might like it to be. There’s a question of what it’s like to be, for all intents and purposes, immortal and what emotional baggage comes with that.

It’s a real issue, one that some authors write off, or ignore, not being able to figure out a way around it, or tell a story about that aspect that isn’t cliched. But when someone can, and tells that story in a way that leaves me wanting more, that’s something truly special.

Need and want are not, always, the same thing. Sometimes they are two aspects of the same flaws seen within ourselves that only one other can really understand.

The Wild West is a place in which the unexpected can be found. Lilith is on the hunt and she always gets her man. The rewards might be worth something to her, but discovering that the one man she’s been seeking for time uncounted leads her onwards. Who is Cain and what does Lilith want with him, or is it what he wants with her?

There’s purpose to her path, a clear need and desire she wishes to find an answer for. There are a few short pieces of erotica in the work, but it isn’t the point of the story, nor do those moments feel out of place or irrelevant to the story either. They offer insight to Lilith, her thoughts, what haunts her and has driven her over the years.

There’s no appearance of Lilith with horns, or tail, but there are some aspects of her powers as a succubus that appear in some deliciously seductive ways that I enjoyed. Lilith is more than the force she is, more than just “the mother of demons” as she is described as. There’s an emotional connection as she reveals her path and where it’s taken her.

The encounter with Cain, when it comes, is captivating. If there’s one thing in this work that I dearly wanted more of, it was that moment when both realized who the other was and they told a little pice of their pasts. That offers so much story, the possibility of them connecting more as two lost souls and I wanted that to be played upon more than it was.

That said, the moment is really well done, what comes next felt right for both and past the climax, the wonders that come before the final words of the story offered something I rarely find. Both characters are more than they were in the beginning, the door is open to more and in being so created a work that felt complete in many ways.

Still, the ending left a lot of story untold in many ways. So much of both Lilith’s and Cain’s past is left untold. Their future isn’t touched on, though it is hinted at to a point. It’s all of the story not explored that I miss here. The work is far too short as a result, leaving me wanting more from this author to tell those stories, both past and future.

I think this work would be the perfect start to a longer series which followed both Lilith and Cain through history and the future. There’s a lot more here, both emotionally and story wise and that would be good to explore.

The characters are amazing, the story is wonderfully told. There’s lovely heat in the erotica, and that’s not over done or feels odd either. Lilith’s succubus aspects aren’t ignored, but nether do they overcome the core of the story. One of my favourite works of the year and I want more.

I really want more than this little vignette of a story. I want to know more about Lilith, about Cain. I want to know what comes next for them both. This is, in many ways, an appetizer for something more and I really hope the author takes the time to try to tell that story.

I’m not expecting things to be perfect, far from it, but there’s too much opportunity for storytelling to happen, and that needs to be. Giving time for the rest of the story to be told, the past to be fully realized for these characters is what I’d like to happen.