A Review of the anthology book Sexy to Go Halloween 2 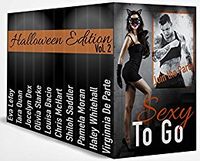 A collection of stories for review this time on the Tale. Being that it is a collection, in this case there’s only one story that really interested me, and that will be the focus of this review. I will add an overall thought about the entire collection as well however.

The past hurts us all. Not just in what we remember, but what the marks left behind are. Our own needs conflict with our reality and we refuse them as best we can. But then comes a truth we can’t quite avoid. Sometimes the need can overcome us and in doing so, allow us to heal as best we can.

Sexy to Go Halloween is back for a howling good time! Join us for a holiday romp with 10 sex-hungry vampires, witches, shifters, werewolves, ghosts, zombies, demons and more.

In Shifting Sensations, Ruger has a problem and on Halloween that problem not only doubles, but becomes three times what it was. His secret isn’t that he is an incubus, that others are attracted to him. The secret is that he wants something he cannot have, but they want him as well. One soul is hard to resist, but two of them with one need is the start of another story.

The work is a hot flash that offers tantalizing hints about the main character Ruger as well as Aubrey, the female lead character. The attraction is strong, has a lot of heat and it’s a delicious peek into each of their thoughts as they fight with themselves, trying to deal with one’s need and the other’s past. That slow simmer really works well, and it’s a delightful story in what’s told and what happened overall.

I did want, in a lot of ways, more told about both of their pasts, for one. There’s a secret about Ruger that pops tip at the last page and it’s a vitally important one. But while there are bare hints about it, when it comes out and explained that didn’t work well for me. My issue is that is it’s a hugely important thing to delve into, but isn’t. It’s vital to explain Ruger’s character, but it doesn’t. Beyond that, there’s also a point, just before the heat begins, where something is shown in his office, that effects Aubrey, but it’s glossed over somewhat.

Similarly, Aubrey seems to have some secrets, ones that would develop her character a lot, but they are pushed to the side for some really hot moments of teasing Ruger. I did like the tease, and it’s told delightfully well. But still I wanted to know more about her, how her mind works. Talking about how smart she is, then reflecting a thought by Ruger and not doing anything with it seems like lost plot.

That then brings me to what really gave me pause. The reveal of Ruger’s secret seemed so matter of fact that it was painful. One that came, the story rushed into the final climax, pushed by it, then came to an abrupt stop. It felt really rushed, it was missing the heat that came, then went, then came and went again. A bit of a roller coast and I’m not sure that was the best thing to do here.

While the heat was there, the story was too short, didn’t develop the characters as much as their histories suggested they could have been. I really think that this would make for a good start to a longer story. Drawing in the past, perhaps colliding with it, would be a very deeply told work. The impact of Ruger’s past is very important to so many that telling that story I think would bring with it the character development I was looking for but didn’t find.

I’ll give this story three and a half out of five pitchforks.

The shame is that there’s so much about Ruger, but really all of the characters in the story, that wasn’t explored. The heat is wonderful, the temptations are lovely, but there’s just something missing with regards to knowing the characters and what really drives them onwards. Adding to that how abrupt the story ends, that really there’s no closure of the plots dangled at the beginning left me wanting. I’d love this short work turned into a longer story, because it’s there to be told, the author need only do so.

For the collection overall, I’ll give three out of five pitchforks. The stories ran hot and cold for me, some of the heat was muted as well. Being the works are all so short, the character development I wanted was pushed aside for the heat. Like the incubus story, there’s a lot of good ideas here needing to be fleshed out. I’ll hope they are sometime.