A Review of Balance Point by Katherine Rhodes

A Review of In Heat by Alena Rhae 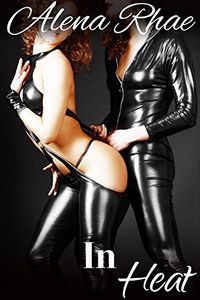 In Heat by Alena Rhae

Where the problem is however, comes from just dropping a character into the midst of a story, not telling anything about them, then pressing on to various transformations, mind control. If, about the point where the story should offer something more, it instead comes to an abrupt stop, that’s a real shame. Once again, heat alone isn’t a story and domination isn’t just an attitude.

Roger wants nothing more than to please his new online mistress—even when it means scurrying around his house like a dog, barking. But when he fails to follow an order, he’s amazed to find her in his living room, ready to punish him for disobeying. The punishment involves a new, womanly body, burning hot with lust and three strong men itching to explore every inch of it.

Roger has been ordered by his mistress to perform certain tasks. Wishing to please her, he attempts to do everything she desires of him. But missing one thing means that he’s disappointed her. When he discovers that Mistress is a succubus, that’s the point where Roger’s life changes to whatever Mistress wants it to be.

The succubus of the work, Sennetta, has the appearance of one, tending to be very cruel and dominate, playing with Roger’s sense of self and his reality. But the thing is, her character is “there” in the story and not actually part of it. She appears out of thin air, there’s no explanation of how Roger came into contact with her. Her needs, what she wants, aren’t explored either. Her focus comes to dominating Roger, changing his gender and then wiping out Roger for a new pet.

It all happens very quickly, there’s not much time spent in telling the story, building on the transformation. There’s a rush to get Roger’s gender changed, then have him, now her, be used in various ways by other pets of Sennetta. Roger never has his name changed when he becomes female either, but then the end point of the story makes it clear there isn’t much Roger left as the story closes.

The ending of the work is abrupt, only suggesting what comes next. It was a disappointing ending to the work all things considered. It should have been more, if only to draw out what is but one sentence that closes the work.

The work could use another editing to bring out Sennetta’s character, to draw out the transformations. The erotica could be rewritten for more heat and substance as well. Overall, I didn’t find much that was attractive here and that’s a shame. Sennetta alone, in just making her more part of the story, telling things from her side, would have helped as a start.

There’s no character development, background, or reason for Sennetta and that really leaves a massive plot hole unfinished. The story suggests she’s a succubus, it’s clear she delights in her sexual dominance over Roger, but otherwise she’s just a means for the transformation and then mind control to happen. A lack of heat, a lack of character development which leaves so much not explored behind. This could have been, should have been, a lot better, the ending most of all.