Hold onto Hope By TeraS

A Review of Punishment Incorporated: The Full Trilogy by Jon Zelig

A Review of Twisted Wishes: Deal with the Devil by Sasha Scott 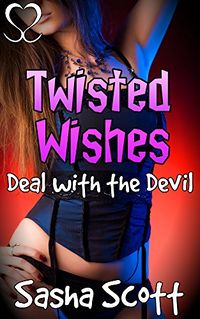 Twisted Wishes: Deal with the Devil by Sasha Scott

Not all stories about Succubi have a happy ending to be found. There are, of course, those stories where things don’t quite go as might be expected, there’s a twist in tail that ends with a curse, or something that’s not what was wanted in the first place. Telling that story can be a tight rope between things being over the top and pornish or the story staying true to itself.

Be careful what you wish for because you might just get it.

Mary was a woman in love, or more an obsessive crush over a man who wasn’t interested in her. However she wasn’t going to allow that to stop her. He was her dream man and she would not be denied, she would make him love her back no matter what she had to do to achieve it, even if that meant asking for evil’s help.

With every other option unsuccessful, Mary was driven to summoning a demon for help with her fairy tale romance. However things are never simple when you’re dealing with a demon. Mary had a pact to make and only one thing valid as payment, her own body. Would that be enough to sate the demon’s desires or would there be an extra twist to this tale?

Mary’s obsession with Dewey has consumed her. Nothing else matters, nothing else will be enough save for the expression of her love being returned, completely, by him. A deal with the devil is never a good thing, especially when one’s desires overcome one’s good sense. Some deals aren’t what they seem and for Mary and Dewey, the deal isn’t what either could have known it to be.

The work is a hot flash which means there’s not really all that much character development as a whole. Mary is a bit two dimensional in her needs, the devil that appears is as well. Dewey is barely there as a character, before things move towards the erotica and the twist in the story. Mary’s mind and emotions are focused on one thing only and that serves really to have her gloss over quite a number of obvious warning signs. Still, things happen, Mary is transformed and with that comes Mary the succubus.

The transformation happens rather quickly, Mary’s thoughts are changed a bit, her needs are pressed against. While that was a bit of a shame, not having her deal with the changes more than is told in the story, when he comes to use her powers, that was interesting. Mary’s nature becomes submerged under a succubus that needs one thing, demands it, and when she gets that, the twist doesn’t allow for her, or her prey, to find their way.

The erotica itself wasn’t as hot as it could have been, both in the first part of the work and then the moments after Mary gets what she desires. There’s a strong mind control aspect to that, which pulls a lot of the heat away, but then that’s part of the theme of this work. A wish twisted, a gift somewhat cursed. The problem is that with that moment, something gets pulled from the story. The emotional context, the need, the want are submerged under a blanket of lust… and it’s not that hot.

The work is a bit short, I’d have liked to see more character development for Mary at least. Perhaps the curse might have been less severe, perhaps allowing for relief and further exploration of Mary’s abilities than what happened. There’s just this emptiness in the story, needing to be filled and how that is done, at least as things stand, didn’t have the heat, or interest me as much as I think it should have.

The work feels a bit rushed, a bit glossed over. I’d like to have more character development than just Mary going off the deep end and what the results of that are. The twist was very obvious, Mary falling into the trap was too quick and almost rote in nature.

A bad end is that, obviously, but it’s getting to the ending that defines the characters more than just needing and having sex. That missing depth, I think, would have made this work a lot more interesting for me.