A Review of Call of a Succubus by April Garrus

Hold onto Hope By TeraS

A Review of the Lust’s Price series by Quixerotic 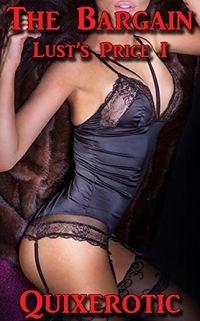 The Bargain: Lust’s Price I by Quixerotic

The thing about some series with succubi is that while there can be heat, the succubi are interesting and there’s an overall plot, missing the details can take so much away. Many times it’s not the best thing to write a hot flash, concentrate on building the heat, and not give a lot of thought to telling a story to hold the pieces together.

Greg is unsatisfied with his life. He’s tired of his family, he hasn’t had a vacation in years, and he’s about to lose his job. Miserable and dreading telling his wife, Victoria, about being fired, he stops on the side of the road where he encounters a peculiar stranger. Promising Greg everything he’s ever wanted, the man in black offers a deal with a heavy price. The stranger wants Greg’s soul in exchange for lust fueled powers, and that’s just the beginning.

The thing about temptation is that the one being tempted doesn’t always see what lurks beneath the surface. Making some deals can bring pleasure, but they have a price. The price to be paid can be one that, in the end, isn’t so much poetic as it is a harsh mistress of justice.

The ten book series follows the choices of Greg as he makes a deal that comes with a very telling price. As things unfold in each part of the series, the town where he lives falls further and further under his sway, various people are corrupted and transformed along the way. The heat in the series comes mainly from the transformations and the erotica that follows from them.

Overall, that’s the main problem with this work, it’s told in a rush, there’s not all that much character development or time spent in exploring the characters after they are changed. It’s a shame really because so many of the characters could have had quite a lot written with them, told some larger stories about resisting their change, or revelling in the power they come into.

The transformations themselves are well done and the erotica does have some heat as well. But the plot isn’t core to what’s going on, the parts of the series barely connect together and at times characters vanish into thin air once their moment is past. Sex alone isn’t that interesting, and in this series that focus upon sex didn’t work all that much for me.

Overall, the most disappointing moment in the work comes in the last book. It’s told in a rush, the moments, whether erotic or plot, stampede by and the climax of the series comes so rapidly that there’s little time for anything substantial to be told. That said, the last important transformation, and what that means for Greg, I liked. But it didn’t go as far as I’d have liked, there wasn’t time spent in at least some gloating, before the work rushed onwards to a final moment that, as in so much of the series, flew by and didn’t go into the detail I wanted to see.

The idea of the series is interesting, many of the succubi are as well. There’s an overall story that, from a mind control or transformation kink, has promise. The problem is that things happen too fast, there’s not enough story to balance the erotica. If there’d been more plot, more character development, it would have helped a lot. More so, the last book in the series could have been a lot more powerful if the climax hadn’t taken literally one page to be revealed.

Taking time to tell a story sometimes means that the erotica has to wait a while. That can make such a massive difference overall.

I’ll give this series three out of five pitchforks.

I really wish there’d have been a lot more story, more character development and some of the subplots brought more into focus. Being that each part of the series was a hot flash, there wasn’t any time for something larger to come together and when the climax came, it went by so fast that it just left me disappointed.

There is a story here, and really the transformations are interesting, but that’s not enough overall for me. Given there are so many characters that are transformed into succubi there was a subplot that might have been toyed with, but wasn’t. Given the conclusion, and the last transformation, it would have been nice to give that more impact than the flash it was.

This is certainly the longest story this author has written, but I really don’t think it is their best work and I wish it was. Gathering this series together, making this an actual novel instead of a series of hot flashes would I think help a lot.