A Review of A Blasphemous Easter by Yura Rybak 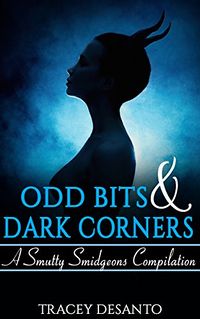 Erotica takes many forms, some are passionate, some are innocent. Some express the forbidden, some the expected. It is, in all ways, the need of the caller that makes the called what they are… and what they will be.

Not all stories end well, some leave questions behind and it is those questions that leave one wondering… why?

Welcome to Tracey DeSanto’s underworld… her dark corner of smutty smidgeons. This is where she lets her taboo fantasies run wild.

Follow Stacy Drake – Girl Detective, as she gets downright personal with a strange boy in the old haunted garage. Learn about what happens to poor William when he can’t get a certain woman off his mind. Enjoy a dip in the Pacific with Vanessa, who is recently divorced, and needs a swimming companion.

A trio of stories with a supernatural theme. One of mystery, one of need, and one of desires. In each the characters arrive at their destinations, just not as they were at the beginning of them..

Each of the works focuses upon a different supernatural being and each tells a different story with its own heat, passion and needs. All are written well, all have interesting characters and the stories are complete in all of the ways they need to be.

The middle work, Nocturnal Emissions, tells of an encounter with a succubus, and so this review will focus mainly upon that story. It’s an interesting tale of falling to a succubus, being ensnared, and then, sadly, the seemingly inevitable ending arrives. It’s expected, and really it’s the single problem with this work compared to the others. This is the only work which ends in a “bad” way. It’s also the only work were the main character is male, which strikes me as an interesting thing as a whole.

All that said, it is a well written story, the seduction, the ensnarement, is really well told, the erotica is lovely and hot. It’s just the ending was rather telegraphed as a whole, I expected what came and really that didn’t need to be I think. While there’s some certainty in what I think of as “typical” stories about succubi, it makes, for me, disappointment.

For the single succubus story: Two and a half out of five pitchforks.

The other two works, especially the first, I felt were far stronger, telling better stories with characters that seemed to be more alive. There was more emotional impact, more mystery. The stories were more thought out, involving the characters in a story that had a lot going on and needing the reader to pay attention to them. It’s a shame that the succubus story didn’t have that same power and I find myself wondering what if it did?

For the collection as a whole: Four out of five pitchforks.

It’s a shame that the succubus story was so expected, so stereotypically so. I had some dearly high hopes at the beginning of the story, but when the end appeared it just took much of what I had enjoyed away. That’s a shame because the other two works were far stronger, far more interesting and captivating. I’m unsure why Angela turned out as she did and I think that didn’t need to be.