A Review of Demon Antics by Gregor Daniels

A Review of Jolene: A Paranormal Menage Romance Story by Giselle Renarde 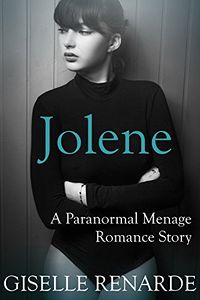 There’s a subplot which really doesn’t appear very often in stories about succubi and incubi. It’s the question to what happens when two souls are in love and a succubus or incubus gets in-between those souls. In that comes a question as to what one would do for love, but more so, what happens when that love, that need, takes souls beyond themselves.

Jolene isn’t too troubled–except by the fact that none of her friends believe she’s dating Wesley, the popular entertainment blogger. Everyone assumes he’s gay, and he seems to prove them right when he shows up at her birthday bash with his “boyfriend” Seth. Who is this Seth guy and why is Wesley acting so strangely? When Jolene’s best friend falls ill after dreaming of the pair, it’s her grandmother who has all the answers: they’re dealing with an incubus, and someone needs to hunt him down. Jolene will make any sacrifice to save Wesley, but can she possibly defeat Seth?

Jolene’s life isn’t complicated. She knows she loves Wesley and she knows he loves her as well. But in the moment of her joy a snake appears named Seth who turns her world upside down. When she discovers that Seth isn’t human, and Wesley is in danger, there’s only one thing to do and Jolene is willing to do whatever she has to.

Seth, the incubus of the work, is for the most part a mystery. It’s clear he is an incubus, there’s no question of that, but it’s more than his personality, his past and what he’s like are not really told. There are flashes of a deeply troubled personality, some cruel aspects of him as well pop up when the climax of the work appears. But even so, there’s just nothing to speak of as to how he became an incubus, why he chose to attach himself to Wesley and why it matters so much to him.

Seth is, from the start, instantly dislikable, which is the point of course. He’s meant to be trouble, evil and more and he is. But it would have been nice to have something more than that to explore, even if that was only him gloating about it, which happens a lot otherwise.

The connection between Jolene and Wesley is delightfully strong and clear. There’s no question they are meant to be together and how Jolene fights for them both tells so much about her. The tender moments matter here and it brings about the most telling moments of the work.

I didn’t feel that the opening passage was really needed here in that it clearly foreshadows the ending. I would have been far more happier not knowing what was to come than knowing from the first page what would be. It is a spoiler, it takes away a lot from the work and I wish it didn’t.

The ending wasn’t satisfying in that it reflected the opening passage. It leaves a lot of questions open, some of them very telling with regards to both Wesley and Jolene’s personalities and character. More so, the question of their future is left dangling as well. Perhaps settling those questions, even slightly, would have been a good thing to do.

The ending does point towards the possibility of another work however. If so, then I’d hope for something more to be told about succubi and incubi. More so, I’d like to know what one particular comment from Jolene at the end of the work foretells for her. There’s also the question as to what happened with Wesley as well and if something precious to Jolene is held by him or not.

The erotica is delicious, the characters have depth and clear voices. The problem is that there’s a lot left unsaid here and I found that took away much from the work. Saying there are succubi and incubi is one thing, but then not playing that off into telling more of that story is where I think something is missing.

The hints of side stories, of the character histories offered a lot, mainly in Seth, but more so in Wesley and Jolene in the aftermath of the story. It’s that aftermath, the single line that completes the story in which there’s a huge question left behind. I’d like to see where that takes Jolene sometime.