A Review of Jolene: A Paranormal Menage Romance Story by Giselle Renarde

A Review of Demon Antics by Gregor Daniels 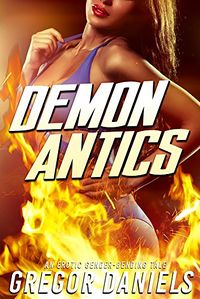 The author Gregor Daniels is quite a prolific author and as part of their body of works, there are quite a number which have a succubus appear in them along the way. They allow for the story to turn in a familiar direction, offering something transformational to occur to the main character along the way. Sometimes however, in spite of the promise the succubus has, the idea of the story, there’s just something missing that leaves things wanting and dearly so.

Encountering a succubus can bring with it unexpected moments. The most unexpected of all is when they need something from you, but you can’t provide it. That doesn’t mean, however, that they can’t pull some strings to get what they want.

Andy has little reason to be excited about the Southwestern Bible Retreat, especially since he’s only being forced to attend and doesn’t believe in that religious stuff anyway. It looks to be a long, boring week of silly games and even duller activities, until a winged creature appears with the onset of a solar eclipse. Unfortunately for Andy, this female demon has some strange things planned for him.

Andy encounters Lilith after a solar eclipse and has a problem. She wants something from him, she’s very focused on that by far. Andy then finds himself taken and changed, being brought to a goal that Lilith craves from him. If, along the way, that means he needs to see things differently, well what is a succubus to do but make that happen?

The single thing I can say is that this is a cute story. Andy and the other characters are delightfully cute, Lilith is not exactly evil, but focused and mischievous. There is a gender transformation, there’s a little bit of a futa theme as well. But it isn’t outright erotica, and tends to play around the edges, not really being focused upon that or making a lot of it.

Andy’s gender transformation, and what Lilith does with that, is the core of the story and it gives rise to an exploration of some of who Lilith is and where she comes from. There’s not a lot of detail, Lilith herself is a tease more than anything else. In an odd way it’s kind of a coming of age story, but it doesn’t get to something more than a point where the story can tie up some loose ends and fade away, and that’s the problem here.

The work is a bit lost when compared with other stories by this author and being so it’s a little difficult to really enjoy the story. The transformational aspects are muted, Lilith is part of the story, but really doesn’t take things very far for Andy’s lack of drive. It is however, cute in its own way and I did smile from time to time. It’s just not one of my favourite works by this author.

It’s interesting in its own way, Lilith felt a bit muted, a little single-minded which took something away from the story. It is a complete work, a rather cute one all things considered, but I can’t say it’s a work that I really enjoyed as much as others I have read.