A Review of Doctor Q vs. Succubus by Skarlette One

A Review of The Incubus Diaries by Kacey Chumley 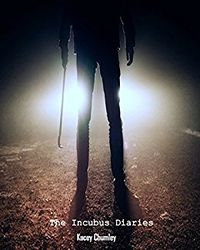 The Incubus Diaries by Kacey Chumley

There are many literary devices that can be used to tell a story. One of them are diaries and within that comes the use of recorded ones. Telling a story by transcribing such memories into text is a very difficult process, more so when the topic is one that is unexpected. Narrative is sometimes a difficult thing and transcripts as narration are one the most difficult by far.

The stuff of nightmares can be within one’s mind, but at the same time, it can be lurking closer still. The story then becomes trying to discover which is the more real, the nightmare from which you can awaken or the one that you never seem to be waking from.

After suffering from an assault by a poltergeist, Alyson Smart makes the decision to move back in with her parents. Over time, she uses a tape recorder to record her experiences with whatever has followed her home. As suspicion morphs into a terrifying race to stay alive, the tapes document her every move. These are her stories.

Alyson tells of her encounters with the strange, the unbelievable and the question of belief from those around her. A story of being lost, trying to come to terms with that which cannot be explained and the choice made when there is a life in the balance.

The work is written in a style which reads very much, as the work states, a transcript of Alyson’s tape recordings as events unfold. It’s a bit hard to follow at times, some of the events being recalled by Alyson in the story can be interpreted in various ways. As such, that brings several conflicting layers to the work which then makes the possible answers to each event become somewhat blurred.

There’s a bit of a “found footage” feeling to the work which adds a little edge of shock and horror at times. The “tapes” leave a very strong mental picture, some of the events are quite horrific in what occurs, others are a mixture of supernatural encounters and personal issues. I’m unsure about how well that works as a narrative however.

The events that play out over the story are somewhat summarized, save for the moments where “actual” events are recorded. Again, that’s a literary device and it does have moments when it works quite well. The problem, at least for me, is that I didn’t quite feel like I was really connected to Alyson, what happened to her and otherwise.

While the work suggests there is an incubus, it’s a bit difficult to actually say there is one. There is the suggestion there could be, there’s some indications of that through some of the things that happen to Alyson herself. It’s less about the incubus itself than it is about Alyson trying to come to terms with what she sees, what she believes and what exists around her. There’s a great deal of time spent focusing upon her family, her relationships with them and how that is stressed over the story.

This isn’t a work of erotica, it is a work of suspense, mystery and being focused on that, it works quite well. The scenes build up the tension, the mystery and when the climax of the story comes, while there is some resolution, the answers are left to the reader to decide on. A different sort of storytelling, with a focus on aspects which are completely unexpected. But I think there could have been something more if the work had used a different storytelling device than it did.

The work is certainly unique, it tells a story that, at least for me, isn’t so much about incubi than it is about the haunting within one’s own mind and ghostly hauntings. A bit odd to read, being the format that the story is told is, sometimes hard to follow with regards to what happens, but nonetheless, an interesting read.