Succubi Image of the Week 481

A Review of The Incubus Diaries by Kacey Chumley

A Review of Doctor Q vs. Succubus by Skarlette One 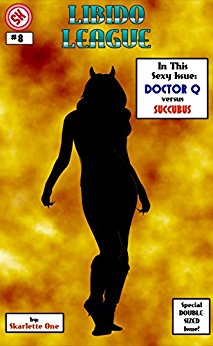 Doctor Q vs. Succubus by Skarlette One

The thing about coming into a series when it’s been going on for some time is that there’s an assumption the reader knows the main characters, has an idea what’s going on. There is a way to get around that, which is of course an info dump. Managing that, trying to keep it from being a long winded page of data that adds nothing to the story is a hard thing.

However, if that information can be snuck into the story in a way that doesn’t take away from the heat, it can lead to some really tempting moments in the story. When one of the characters is called Succubus, things can be more interesting as well.

But calling oneself “Succubus” sometimes doesn’t mean you are one. At least until something unexpected happens and then anything could happen.

A review then of the eighth work in the Libido League series in which temptation isn’t just a word, it’s a need.

Doctor Q, the Enchantress Exemplar of Earth, awakes naked and in chains. Her captor, the supervillainess called Succubus, plans to auction her off to one of her greatest foes. Cut off from her magic powers, can Doctor Q find a way free of Succubus’s leash, or will the temptations of a demon’s flesh prove too seductive to resist?

Doctor Q is having a really bad day. If it isn’t being captured, it’s being teased mercilessly and if that isn’t enough, knowing the villains are delighting in her capture is the most frustrating thing of all. Succubus is a mistress of temptation, and Doctor Q sees the danger, but when things take a turn towards hellish intentions, there might not be a way to escape, if she really wants to.

The character Succubus is interesting, I liked how her abilities and physical appearance lent themselves towards her villainess name. She’s seductive, but evil. Passionate and dangerous as well. There’s a sense that she has some power, and isn’t exactly afraid to use it, which brings about an encounter and transformation that I really liked.

However, before that climax and conclusion, the scenes with Succubus, both before her transformation and after, had temptation, control and a bit of an edge that told a delightfully evil and wicked story. I’d have liked more of that, perhaps less of a roll call of other villains appearing to gloat as well. The focus on Succubus and her seduction needed to be more present than it was and all of the interruptions took some of the heat away, which was a shame.

I think the story could have been focused to Doctor Q, Succubus and the surprise mystery villain who takes the story in an unexpected direction. Doing so, there could have been a lot more heat, perhaps more corruption aspects as well. It’s that corruption/transformation scene that I liked the most and what Succubus did afterwards. There’s lovely temptation and heat, which worked really well. I just wanted more of that.

The work ends a little disappointingly for me, mainly in what happens to Succubus. That said, there might be some lingering effects, and that’s something I’d like to see have an appearance at some point. The idea of Succubus being the foil to the mystery villain I really like, and if things happened the way I’d like, Succubus could be a really good threat to Doctor Q, possibly more than any other villain mentioned in the work. For that matter, she could well be a threat to all of the villains as well and that idea I think is delightful.

There is some delicious succubus moments in this work, the transformation scenes are really well done, there’s a lot of heat in the erotica as well. The characters are interesting, there’s a lot of background and history as well which adds a lot to the story.

But there’s really not that much “succubusness” in the story overall. While one character is called Succubus, she isn’t one, not really for the most part. That said, the events of the story offer the possibility that some remnants of being in the clutches of an incubus could make a reappearance, should Succubus return to the series in the future.

The comic book feel of the story worked well, some of the dialogue might have been improved somewhat, mostly to take away some of the more “ba-hah-hah” moments. The focus of the work isn’t on Succubus herself, obviously, but perhaps at some point there needs to be time spent telling the story of the villain herself in a similar way to the heroines.

A heroic adventure that has heat, passion, lust and desire. At the same time there’s depth to the story and characters that makes things more interesting. I’ll hope for something more for Succubus herself, and I’ll likely see about reading the rest of the series to get up to speed on this universe. A delightful read, overall, I just wish there was more “succubusness” to make it more interesting for me than it is.