A Review of Succubus #3 by Rob Hicks

A Review of Pleased by the Billionaire Incubus by Niele Notoki 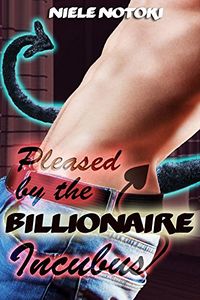 Pleased by the Billionaire Incubus by Niele Notoki

There needs, at least for me, to be a connection between characters in a story. A reason for them to encounter each other, to become intimate, to have something more happen between them. One of the basic connections is a physical attraction, but there’s something else. Being on a first name basis with them. It makes for a very odd story when one character cannot, it seems, use the other character’s first name irregardless of all else.

A story in which that connection does not appear tends to be flat, looking for meaning, and gets lost along the way. Sometimes sexuality is more than a word, an expression of one’s self. More so when one is a sex demon and should know the other intimately all things considered.

What if your boss died and came back as a seed-eating demon? What if you’re his prey? Trevor is so handsome and muscular he should be working as a model. Instead, he works as a secretary in a big company, helping his new boss as the previous one, Mister Drake, died an horrible death. Mister Drake was your everyday billionaire CEO: Tall, slender, with long, black hair and hazel eyes. Too bad his body splattered on the sidewalk, but Trevor didn’t care much, as a new CEO took his place almost instantly. Why should Trevor care? He is a straight dude, and Mister Drake love confession was so awkward he didn’t even want to remember!

Unable to become an angel, Mister Drake becomes an Incubus and comes back with a simple objective. He can’t remember what it is exactly, but why not enjoy his life as a demon, and bed the secretary he so much loved? Determined to try again, Mister Drake offers a proposal that Trevor won’t refuse.. Will Trevor enjoy his first time with another man? Mister Drake is an Incubus of many secrets, and his demon tail and horns are only two of them.

Trevor watched his boss leave this world and now he’s finding himself haunted by Mister Drake. He wants something out of Trevor, who wants nothing to do with him. But being an incubus, Mister Drake might have something to say about it whether Trevor wants to know about it or not.

The single most odd thing about this work is that there really isn’t any chemistry between the two main characters. Their own sexual natures are at conflict with each other and being so that mixes a lot of strife between the pair. As a result, almost the entire work revolves around Trevor pressing against Drake’s advances and in return Drake comes to use his powers as an incubus to push Trevor into doing what Drake desires.

That does work as a story, but then comes the complete lack of a first name for Mister Drake. His name is never spoken, never referred to. That makes for an odd narrative as it’s always “Mister Drake” in the story and that becomes more and more odd when the erotica appears. I can see it as being, in a way, Trevor’s resistance to Drake causing this, but beyond that, it reads as something which trips up the reader.

The erotica has heat, a shade of mind control, certainly Drake uses his incubus powers to “help” Trevor fall to him. The part of the erotica that bothers me is how the two characters seem to be talking past each other, really not to each other. The internal conflict in Trevor is, for the most part, ignored by Drake. The reason for that is simple enough, but the story doesn’t delve into that reason. I think it should have if for no other reason to make Drake more of a character that he is.

Drake is far too self absorbed, seemingly caring about himself more than anything else. I found that I couldn’t like him very much and as for Trevor, I felt for him, being pushed as he was. Which brings me to another thing that I think wasn’t considered. An incubus, or succubus for that matter, uses their prey’s natural sexual desires. That didn’t happen here as Drake didn’t seem to care, was only wanting one thing. The reason for his return offered a more interesting path to take, but he takes it as a reason to make Trevor do as he wants and that didn’t work well for me at least.

There’s missing emotional context, the story seems forced at times. There are several story paths that could have been taken, but weren’t. Neither character connects with the other and the final page offers a solution to the story which, for me, was forced, uncertain, and most of all left me wondering what was the point to Drake’s actions when he could have offered it in the beginning.

Some direction would have been nice, a connection between the characters more so. The idea was interesting, but in the end what came from the story left something to be desired for the characters and for myself as the reader.

There’s really no emotional connection between the characters, there’s little in the way of chemistry as well. While that adds an edge to the encounter, one character ignores it, out of self interest, the other can’t. Being forced to submit, and in a way that doesn’t make the connection any better just makes for a story that didn’t hold me as I thought it might otherwise.