A Review of Succubus4Hire by Thea Blakesley

A Review of Demon in the Mirror: Taken By a Demon by J. D. Braxton 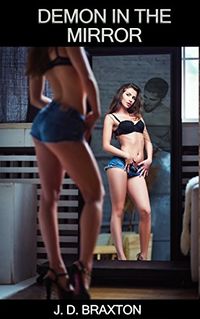 Demon in the Mirror: Taken By a Demon by J. D. Braxton

A story needs time to happen, rushing that story in order to come to an ending doesn’t really work well. More so, a story with erotica, even if it is fleeting, needs some heat, a reason for being. Offering a story that leaves only questions about what exactly happened isn’t be best way to leave characters, or a reader, hanging.

Jenna thought Garret’s obsession with dark magic was just part of the goth scene. That all changed when Garret convinced Jenna to have sex in a graveyard in an attempt to summon a demon. Pure foolishness she thought until a demonic presence haunt every reflection in which she saw herself.

Jenna finds herself brought to have sex in a graveyard and things start to go out of hand soon after. A shadow appears, a voice haunts her and things go from confusing to terrible in a short span of time. Caught in a trap, the way out isn’t the easiest thing to find.

It’s difficult to say this is a work of erotica because there’s really not that much erotica to speak of. It is teased, suggested, but rarely actually unfolds. What little there is has very little heat and doesn’t add all that much to the story as a whole. It’s a bit more accurate to call this a mystery/horror work that has a lot of teenage relationship attached to it.

The ending of the work is somewhat of a surprise, not really answering anything, just bringing the work to a close as quickly as possible it seems. It is a reflection of the balance of the story in that there’s a rush to get to the end as there was within the story to get to the next part along the way. It’s a shame because there are other characters in the story that might have been explored, perhaps the incubus might have been more involved with them. Perhaps there might have been something more than a fleeting connection between Jenna and the incubus as well. The connection to the characters just were too tenuous for me and that’s a shame.

The idea of the work was interesting, there was some promise in it, but much of the complexities of the characters themselves, the situation and the events didn’t get as much time as they might have. The work could have been doubled in length and then I think there would have been a far better story than what actually developed.

The work needs more focus, the characters to be developed more. There’s quite a few plots left unanswered and not touched on, not the least being who the incubus, if he was one, is, what he wanted. Beyond that, the ending was confusing, didn’t make sense with the balance of the story and left more questions than answers. This reads like an incomplete story, being only the highlights of something more to be told. Perhaps the author might consider expanding on what they have and making more of this than there is.

There’s really not a lot of story, the characters don’t develop, the incubus, if he is one, never has a chance to tell his story. The ending makes little sense, almost feeling like it was dropped in to end things in a hurry. This could have been a lot more than it is. Sadly the promise didn’t get where it could have.