A Review of A Date with Lilith by J. D. Braxton

A Review of The Demonic Bride Trilogy by Lacy Lane 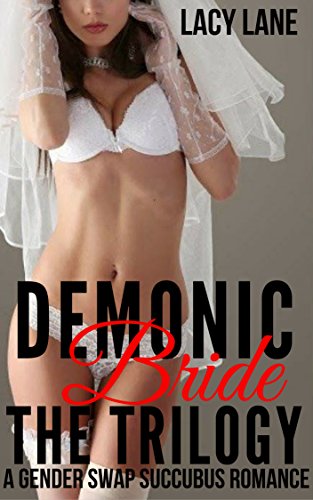 I’ve read some of the author Lacy Lane’s works, and I’ve reviewed one of their works on the Tale a short time ago. The author published a trilogy which tells the story of a man encountering a succubus, being transformed by her, and then having to deal with the aftermath.

I do enjoy stories that have depth, good characters, a point to the story and this series has all of that going for it. There are some minor flaws in the storytelling, but those are minor quibbles to one thing. The series is about dealing with change, with understanding who you are and what it means to love another.

Joshua Chapman and Brandon Powell have been best friends since high school. And although they’re single and kind of nerdy, they’re enjoying life.

Until one night at the local bar when Josh interrupts a succubus taking her evening meal of male essence, and she decides to teach him a lesson by turning him into something that’s half woman and half sex-craving demonic slut.

Josh learns that to save himself, he has to live out the rest of his life as a woman and a wife. Who better to take on the role of his husband than his best friend, Brandon?

Three months later, Josh has been transformed into Julie Powell, and the newlyweds are happy as can be…until Julie accidentally turns an old man into a sexy young woman while feeding, and is then kidnapped by a sex-starved she-demon named Felielle.

Brandon finds himself racing against the clock to save his wife from the clutches of Felielle and her succubi daughters before they can turn Julie into a full-blown she-demon and steal the woman he loves away from him.

Will Julie and Brandon be able to live happily ever after and start the family they want so badly?

And what about Felielle’s evil plot to turn the entire world into man-eating bimbos?

There are some things that one should never do. Getting on the bad side of a succubus when she’s feeding is one that Josh discovers. Cursed to become like the succubus, Josh, now Julie, has to face the impossible. Not just being a woman, not only that she’s a succubus, but having to face her family, her world and, in time, confront the succubus that started it all to save a world that doesn’t realize the dangers.

The series is quite the epic tale, but it’s not really focused too deeply on the gender swap aspects or the succubi either. At its core it’s about Julie sorting out her new life, coming to terms with that, with her love, with her family. There are conflicts, losses and tragedies but at the same time there are moments of joy, passion and resolution that add depth to what otherwise could have been a thinly veiled story of gender transformation.

The erotica runs a bit hot and cold overall, the moments between Julie and Brandon are wonderfully soulful things and adored. The scenes with succubi just don’t really have that, but that’s a reflection of the characters themselves. It’s a shame that there’s not the seduction, it’s outright sex and no emotional meaning for them. It’s a dark point to many of the characters and that brings the issue I have with the work overall.

If there’s one thing I didn’t think worked well, it was how very Felielle and the other evil succubi were too close to being stereotypical. At some points that turned into comic book villain levels of evil and the climax of the series, how that plot arc was resolved, felt too rushed and confused at times.

That said, the ending of the series felt right, it settled a lot of questions about Julie, her family and most of all, what the future holds for her. It doesn’t leave a lot of dangling plots behind, which was good to see. But it ends in way that leaves a path towards another book about Julie. It’s that open thread that didn’t quite feel settled, almost rushed, and I wish it hadn’t been.

Overall the series is well written, the intimate moments when Julie is trying to understand her path, the conflict within herself, were very powerful. The transformation of her relationship with Brandon, the battle with her family and then the terrible things that happen through the efforts of Felielle make for a really good read. Perhaps the comic book levels of plot at times needed more focus, but that didn’t take away from the purpose and drive the series had.

A delightfully fun and emotionally driven work. It’s more than erotica or a gender swap tale. There’s a deep universe to explore and that’s delightful. I do wish that the evil succubi in the series had been more than the two-dimensional characters they were at times. I’d also have liked for the ending to tell more rather than come to the finality that it did.

Well written, deeply involved and more importantly, there are consequences to every action. It makes for a compelling read, one that I enjoyed. It’s just the little oddities that hold the series back from what I think it was meant to be.