Succubi Image of the Week 479

A Review of To Feed A Succubus by De’Vaughn Brathwaite

A Review of Seduced by a Succubus by Lucille Grey 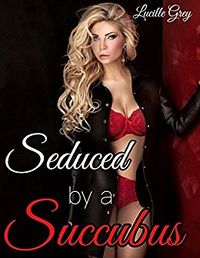 Seduced by a Succubus by Lucille Grey

The thing about a work in which there is a succubus character, is that leaving that character as a shadow, an incomplete thought as a whole, takes away a number of opportunities for storytelling. It’s not really enough for the character to speak a few short sentences and not much more. It’s more bothersome when their focus is on sex with another character, but there’s never a moment to peer beneath her form into who they are underneath.

It’s telling half a story, one side of a conversation, and leaving all else unsaid. Summing up their reasoning for their actions in a single sentence at the end of the story is, overall, really disappointing.

Cody’s life has begun anew. A new town, a college to explore offers a chance to find the unexpected. Encountering Lily, he finds himself needing to be with her, allowing her to do as she wishes. But with that comes the feeling of losing something important to Lily and Lily wants it all.

That erotica, overall, has some heat, but it’s a bit glossed over. Some of the scenes are dream-like, some clearly point out that Lily is a succubus, and others just are very rushed in how thing unfold. The climax, in many cases, loses much of the heat created for the sake of ending the scene and moving onwards to the next awkward moment or the next encounter with Lily.

Lily, the succubus of this work, is a mystery. There’s little told about her form, she speaks in clipped tone and phrases as well. She’s not developed as a character, popping in and out of the story just long enough to ensnare Cody, pull him into a sexual encounter with her, and then vanish into thin air. That’s a shame because there are three points at which there seems to be some story to be told about her, but they don’t go anywhere. One example of this seems to be a roommate of Lily’s appears at the start of the work, but never returns. It leaves the question of who she is, if she’s real or a succubus or something more.

Questions about about Lily, save of course that she delights in entwining herself with Cody, pleasing him and then taking what she needs. That’s the problem with this work in that Cody’s development as a character is strong enough to make the reader care about him, but for Lily, there’s nothing to hold onto. There’s no past, no present, no moments between her appearances to show something more about her. It’s a lost chance to tell more of a story, to give life to her character beyond “just a succubus” which seems to be the overall tone.

The ending was, sadly, completely expected and was telegraphed from the beginning. Beyond that, the ending itself was abrupt and offhanded in how things came to a close. Summing up Lily with a single sentence to end the story didn’t do anything for me, nor did it really explain anything about her. It did offer a path towards another story, but even then that’s done really half-heartedly.

There’s really no character development of Lily, either as a character or for that matter a succubus. The hints she is a succubus are rather oblique and if the book title, or summary for that matter, didn’t expressly say she was a succubus, it would be easy to overlook some of the hints given.

As such, Lily is a mystery from beginning to end, there are some dangling plots left unresolved as well. There’s a very easy path forwards towards another work, which might be more focused on Lily, who she is, where she came from and so on. The work doesn’t focus on sex scenes exclusively, but while Cody’s character is explored, Lily, the other half, never has her due.