A Review of Vinyl by Julio Mario Espinosa Jimenez

A Review of Oops An Incubus Got Me Pregnant! by Vanessa E. Silver 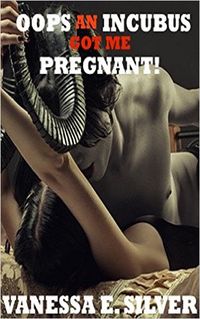 Oops An Incubus Got Me Pregnant! by Vanessa E. Silver

There are far too many works that are short, lack direction and are missing a lot of things. Poor dialogue is a problem, a story without purpose isn’t much of a story to be told. But most of all, leaving the characters with no soul, no life means there can be nothing good that comes with the closing of the story.

Sex alone isn’t a story, suggesting there is more is a start, but not paying that off within the pages is a mistake. Focusing on the characters, what makes them tick is the basis on which all else is told. When that’s cast aside, then there are issues.

Claudia is happy that she has moved into her new apartment to mark a fresh start to her life, even despite hearing talk of a ghost already inhabiting her new home. But she is not put off in the slightest, thinking that any mention of the supernatural is absurd.

However, Claudia will soon find her beliefs tested when she comes face to face with the seductive Lord Malcolm Greyjoy the resident incubus who lived over a century and half ago and is now determined to make Claudia his completely.

Claudia tries to at fight against the powerful pull she feels towards Malcolm, but when desire overwhelms them both she finds herself surprisingly very willing to surrender to all of his demands!

Claudia has a new home, but it comes with a past. That past comes to haunt her and when the truth comes out, she finds herself at the tender mercies of an incubus with a single desire.

Malcolm, the incubus of the work, is rather two dimensional, wanting one thing from Claudia and beyond that his character doesn’t develop, become more, or have much that interested me. In a similar vein, Claudia’s backstory is skimmed over and that never should have happened. It leaves a lot of questions behind needing answers to explain what was going on here. But in the rush to get to the erotica, beyond Claudia’s telephone calls, that never happens.

Then there is the problem with the dialogue. It simply sounds wrong in so many ways. It is stilted, odd, and it just doesn’t fit. It’s very much like the characters are reading from a script and doing that badly at times. This takes much away as well, and any intimacy between Claudia and Malcolm gets submerged beneath, not being about to come out.

The ending is, most of all, a disappointment. The work comes to a screeching halt, with no actual meaning to the ending. Malcolm is flat and Claudia’s needs are ignored, the pair’s moment only serving to make the work’s title be true, but otherwise it means next to nothing.

The work needs a serious editing, to being the characters to life, to bring some kind of plot, and to make the ending make more sense than it does. It’s a shame considering that both main characters could be something more than they are, they never get the chance.