A Review of Milked by the Incubus by Ruby Thurston 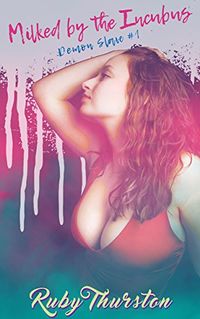 Milked by the Incubus by Ruby Thurston

A few months ago I reviewed the prequel work in a new series called Demon Slave and you can find that review here on the Tale. There was, at least to me, a lot of depressive aspects to the story of the main character Zoe and that tended to make that work a difficult read for me. Today’s review, of the first work in the series, has its darker moments, there’s no question, but at the same time there’s a slight difference in tone that made the work a better read as a whole.

The D/s themes are as strong as before, there’s still a degree of some parts of the work being a little bit over the top, but in spite of this there’s an important difference. The world building, the creation of each character, including Zoe, does a lot to take things beyond the erotica towards something more.

In a world where demons have taken over earth, Zoe Miller sees one way to ensure her safety and future: volunteer to become a sex slave to a demon master. She chooses an incubus to lead her into the dawning age of demon dominance, expecting him to transform her into the perfect busty pet, bursting with cream for him to drink.

But Gadriel is no typical incubus. One mistake—seducing another, more powerful prince’s lover—cost him his crown and most of his powers. Reluctant to accept his new life as a mere lust demon and governor of Northern California, Gadriel takes on a human. He plans to use her only for nourishment purposes and as a reward for his loyal hellhound—a slave for his slave.

With her lofty demonic dreams smashed, Zoe resolves to give her new masters only what they ask for, nothing more. But despite a frustrating start, immersion in her new life might just be a slice of heaven in a world overrun by hell.

Zoe has made her choice and with that comes the end of her old life and the beginning of something new. But there are challenges to face, dreams to hold onto or have shattered. The world changed before, now Zoe will as well. Whether that is her dream or nightmare isn’t up to her, it’s the choice of the being that holds her leash, life and all.

The work follows on immediately from the prequel and wastes no time in drawing Zoe into the world of the demons that have taken over the Earth. There’s quite a bit of story told, setting up what’s on Zoe’s horizon and in that comes quite a bit of information about this universe. At the same time, once Zoe’s choice is made, the work moves directly into a D/s theme with some heat brought from Zoe’s submissive needs and desires.

The most time, overall, is spent in the erotica and being so there’s a certain tone to it that didn’t quite work for me in the same way that the prequel didn’t as well. It’s not abusive as such, though at some points it’s really over the top and that brought me out of the story at times. Being that there is a supernatural tone to the work, that makes sense, but the scenes go a little too far, are a little too over the top. Much of that comes from the incubus of this work Gadriel.

Gadriel is, for the most part, a mystery that is only hinted at, not really delved into deeply. He is an incubus, horns and tail and all, but there’s a wall between who he is and what he shows to Zoe as they meet and their plot develops. As a dominant, he’s pushing the limits at many points, bordering on abuse many times and that too much of the heat out of the erotica for me. Despite that, many of the D/s moments that weren’t totally enwrapped with sex did sound and read well. Gadriel is a harsh and firm dominant, but there’s an aspect within him that appears fleetingly and I really wanted to see more of that rather than the colder front he displays.

In the last few pages of the work, a succubus, Ashtara, appears and she’s just about the most stereotypically written succubus I could imagine. What’s interesting at least is that she’s supposed to be a Duchess of Lust, but she isn’t. That is a story to be told, of course, as she seems to be important to where the series goes, but if she’s simply there as a means to an end with regards to Gadriel and Zoe, that need not be.

Zoe as a character is well developed overall, but the same can’t be said about Gadriel, even less so for Ashtara. The erotica overwhelms the plot many times which makes some of moments when plot and story need to develop seem to be rushed. The D/s theme, at least for me, is a bit too dark and impersonal. While I understand why that is, from my perspective and experience there needs to be more development of that story. The darker tones are still there, holding sway over everything, and while that works, it takes a lot of the moments of joy from Zoe. Perhaps the one thing that’s missing, the joy of being submissive to the right dominant.

Where the series goes from here could turn really dark, considering how things closed and I hope it doesn’t because that would be the expected thing to do. I expect that Zoe will be in danger, but where that takes her and Gadriel is what interests me. I hope that’s more surprising than just being a D/s fantasy wrapped in the guise of a story about incubi and their pets.

There’s a solid story here and I think that’s where the focus needs to be. The erotica will be there of course, and it should support the story. But erotica for the sake of itself leaves a lot of story languishing in its wake.