A Review of Incubus by Nine Sparrow 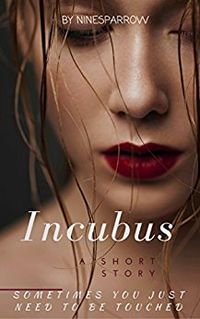 There is, in a lot of ways, a tendency about incubus characters when they appear much of the time. Their character seems to be focused upon one need, one desire and very little else. I find that creates a two-dimensional character that doesn’t interest me. Sex alone, regardless of the heat within the moment, isn’t erotica.

The telling of the story, of the characters having a past, a story to tell, matters. To offer little tidbits of story, then pass over them in a rush to get to the next sexual encounter leaves a lot to be desired. Many times it is the untold story that offers something more than the story itself does in the end.

Lust can drive need, want and desire. But being foolish for the sake of unfulfilled lust opens the path towards one’s own downfall. The question becomes how wanton the path is, and who is hungering for the downfall to be.

Emma just wants to be touched, and she finds the perfect opportunity in an old spellbook. A spell for summoning a male demon of lust, an Incubus, might be her answer for pleasures unimaginable. But will she be able to control him?

Emma’s one single sexual experience has driven her towards a telling decision. A spell cast, an incubus summoned and her needs to be fulfilled. But within need there are traps waiting and Ozozel awaits Emma to either give in or give way.

The work is a short, hot flash of erotica which does have at times some moments of story offered, but they aren’t developed or paid off within the story itself. There’s a focus on Emma and Ozozel, their encounters and what happens to Emma. The story of Emma’s needs and desires, how they drive her onwards and what happens as a result is well told. But what’s missing is, save for the very beginning, a reason as to why Emma makes the choices she does.

While Emma, as a character, is well developed through the story, her character being the focus of the work, Ozozel isn’t developed much beyond being an incubus and having a singular focus. This one dimensional aspect to his character bothered me the most, especially when the ending came. At many points Ozozel begins to offer something storywise, but it’s pushed away for the sake of Emma’s lusts which overcome all else. Ozozel is quite willing to do so, there’s no question, but in doing so the story possibilities from his character aren’t explored.

The erotica itself runs hot and cold, some of Ozozel’s actions and Emma’s keening needs are a little over the top at times as well. While Emma’s wants press her towards sexual encounters that are a bit violent in nature, the lack of real story telling as to what she thinks between the moments took something out of the erotica itself. Sex alone, at least for me, isn’t erotica. Telling the story from one perspective alone leaves something to be desired in the story telling.

The climax of the work comes very quickly, and it wasn’t really a surprise when it did. The moment is referred to, several times, and it wasn’t played out as well as it i think it needed to be. The conclusion fits well with Ozozel’s character, Emma’s end fits in the tone of the story, isn’t really out of character for her either. But it was expected, didn’t offer a really satisfying ending either. The story sort of rushes into a wall, comes to a stop and faded away and I think it shouldn’t have.

With all of the time spent in building up the encounters before, how Emma changes over time, mentally and physically, the ending I think should have taken a step further than it did. It’s not quite a happy ending, it doesn’t need to be, but how things are told seemed rushed. A few short paragraphs to end things didn’t tie the story up neatly, didn’t allow for that last bit of character development for Emma or for that matter, Ozozel to tell his side of things, or suggest more of what would be next than the single paragraph that closes the story.

The work is too short, it needs more time for Emma’s story to be told, for Ozozel to be more within the story than he is. Emma is the centre of this work, but Ozozel is too much an afterthought, an expected incubus and that didn’t need to be. There’s a good story here, but it’s too rushed and that’s the biggest shame of all.

The ending, most of all, took so much out of the story for how expected and rote it was. A story about desires sought, needs unfulfilled and in the end, a choice made which leaves so much story by the wayside. it’s a shame that the author didn’t develop the moments between the encounters more than they were, because there’s a lot of story within those moments that I would have been interested in reading.

Sex alone isn’t a really good story, it’s the characters themselves that make things work. Emma opens the door to that story, but Ozozel never really becomes more than a means towards an end. Perhaps that’s the problem with rushing to the ending and not giving time for the story, or the characters, to become more than the erotica itself.