A Review of Hellhounds: The First of Many by Osgood

A Review of One Night With A Succubus by Siren Allen 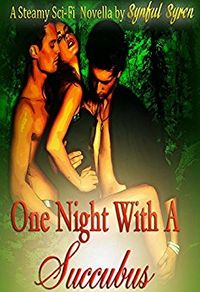 One Night With A Succubus by Siren Allen

Quite some time ago a series called Succubus Nights began, a story about succubi and sci-fi, but for the longest time nothing really happened. I thought that was a shame as the series was set in a sci-fi theme with succubi appearing as the main characters.

Recently a third work in the series appeared as a preorder on Amazon and so I’m going to be reviewing the prior two works which precede it. Each story follows the adventure of a different succubus, each with her own story to tell. Overall, I liked the stories, I think there’s a lot of promise here, but is one thing that is missing.

Telling the story of succubi in space isn’t just about the sex, it’s about the characters, their lives and most of all, the world they come from. Not telling that story leaves a lot to be desired I’m sorry to say.

Lost and starving, Natina Duvo has to find food and fast. Bread and water won’t do. Only hours of rough sex will keep her alive and give her the strength she needs to complete her mission. Hopefully the men of Earth will have enough stamina to survive one night with her. She will soon find out.

After a slight mistake which causes her spaceship to crash on Earth, Natina finds she has a few problems. She’s hurt, which isn’t good, her ship is busted, which is even worse. But most of all, she’s crashed on Earth and that’s not a good thing for a succubus. Perhaps, if she’s lucky, there might be a willing human, or two, that would like to help?

The first thing I’ll note is that this story isn’t 82 pages long. It’s actually about 40 pages, the balance of the book being excerpts of other stories by this author. As such, there’s a rush, overall, to get past Natina’s crash, put her into a situation where she can become intimate with two men, and then draw the story to a close. It’s a shame because along the way there’s a good deal of hints about other characters, what Natina had been doing before the crash, and some clues about the world she comes from. There’s a huge story universe that’s teased, but it never becomes as fleshed out as I wanted things to be.

Natina’s character is fun, unique and spirited. Her internal monologue at times is hilarious, but beyond that, she has a soul, emotions, and overall is a really well fleshed out character. But while that is all true, it’s the little commentary here and there about her past, her role in succubus society, the mission she was on, all of the little things that give Natina more than just “being” part of the story.

The introduction and buildup towards the erotica seemed rushed, as a whole. I wanted to know how she got into her line of work, who her friends are, the ex-boyfriend she has. At times the story read as if some sections of the overall plot were pulled out, or more accurately, shortened and I think that need not have been.

The ending left quite a number of plots open, ones that I’d like to see told. Not just what happens next with Natina herself, but more so, what’s going on that was dangled out, but not explained. Natina is a succubus, her powers are touched on, her needs are in the same way. But there’s little about succubi overall, even less about her world and as for the universe outside of Earth, there’s a huge story to be told there.

The writing needs one more editing pass, there’s a few odd moments of dialogue, the erotica could be allowed to simmer more than it was. Most of all, the story needs a chance to breath, and adding more storytelling would do that. I liked Natina, I hope there will be more told about her as I didn’t feel like her story really was told as well as it could have been.

The flavour in this universe comes in the background, and that really needed to be told more than it was. Being that this was the first work in a series, I hope the following stories will give more time to fleshing out not just the characters, but the universe itself. We’ll see what book two, Falling For The Succubus, brings which I’ll be reviewing next, and the arrival of book three very shortly as well.

I’m hopeful as the idea of succubi in a sci-fi universe has always been something unique. Telling that story, in this series at least, needs more than just the sex alone.