Succubi Image of the Week 476

A Review of Succubus Supreme by Carl East 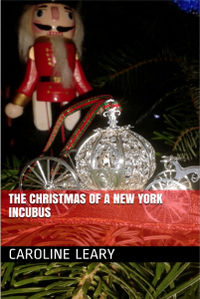 The Christmas of a New York Incubus by Caroline Leary

There are some stories told where things aren’t quite as you might expect them to be. From the first page there’s a certain feeling, emotion, connection to the characters which works so very well. They have depth, emotion, needs. It can be masked, to a point within their point of view, but it allows for them to explore who they are as the story leads them onward.

There is more to life, being an incubus, than what drives you. There’s a need, somewhere inside, to find a connection, no matter how mythical that may be. There’s more to life being human than just existing, there’s the question of living one’s dreams. Sometimes the two meet.

Patricia unknowingly lives near an incubus, a man who feeds on the sexual dreams and pleasures of women. New York is the perfect place for an incubus to live because he blends in with the local population. Henry is really a nice guy and works at ensuring the women whose dreams in invades, enjoy the experience. He is tall with brown hair, dreamy deep brown eyes and speaks with an English public school accent – entirely the stuff of fantasy.

The needs of an incubus like Henry aren’t all that a surprise. The needs of a human like Patricia aren’t either. Two lives collide, one needing, the other offering, both unsure of what comes next exactly. But the search for understanding brings with it one simple thing. Sometimes what you want is what you need.

The most wonderful part of this work comes to how the characters are described, their thoughts shared, their lives told. The author has taken the time to develop both characters beyond being their sexuality towards a fuller, more vital existence. The telling of how each thinks of the Christmas season, their thoughts about those around them and themselves, gives them both depth. There is emotion, there is thought, sometimes a little bit of strife and self shaming. But with all of that also comes the connection between the two that makes things far more interesting.

Patricia isn’t a women lost, she has a life, a goal, but also a need. She’s strong willed, she has personality and even as Henry has an effect upon her, she’s still, nonetheless, true to herself, her own view of the world and what she holds to be important to her.

In contrast, Henry, even as an incubus and telling of his nightly, and more, searching, is every bit as strong willed as Patricia is. He has a need, a want, and Patricia seems to be the one who takes him from existing to actually living. There’s a point in the story where Henry’s character changes, becomes something far more than he was before and I really liked that when it happened.

I also liked that the incubi in the work, there are more than Henry himself, aren’t evil, are more than being stereotypical. There’s a sense of them being good, or at least wanting not to do harm but rather share passions. That’s a lovely idea, one that appeals to me very much.

The erotica is a series of hot flashes, some of them tending towards a more fantasy aspect overall. The heat for me was less so when Patricia’s fantasy world came into being than the first encounter that Henry had with Patricia in her dreams. Reality, even if in a dream, was quite a lot hotter than the expectations of the fantasies.

The writing comes with some delicious humour, some lovely innuendo. The characters are deep with their stories and that allows things to develop in ways that do, clearly, make things turn in ways unexpected. Wanton at times, telling at times, but never are the characters not true to their own needs and wants.

Wonderful characters, their connection is palatable and present from the moment they touch each other’s lives. The erotica has some lovely heat, if a little bit odd at times. The story being told matters, the erotica there to drive it onwards, not control it. The hints of Henry’s world are teased, really I wanted to know more about that. The tapestry of Henry and Patricia’s courting, really there’s no better way to describe it, works well. It’s a shame that it doesn’t get out of their minds into they both actually doing something about that.

I liked the story overall quite a lot, though at times the two characters dancing in circles was a little bit repetitive. It’s a shame that the author never continued this work towards the series they seemed to suggest it was meant to be. Henry is interesting, unique and I would have liked to see where this all lead to. One hopes that’s an ending where both Henry and Patricia find what they have both been seeking.