A Review of Succubus Supreme by Carl East 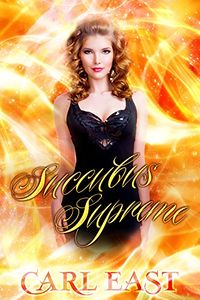 I’ve reviewed quite a few of Carl East’s works, at least those that have something to do with succubi and you can find a listing of my reviews on the Tale here. I’ve found that the stories can be very good or not so much so and it’s the lesser works that bother me the most.

Just this past week the author released a new succubus story, one in which the book summary was attractive, the main character seemed like they had a story to tell. However, in the end, I’m really disappointed in the story for a lot of reasons. It’s one thing to drop a reader into a a story universe, but it’s something else entirely to not use the plot threads told, the ideas offered, and just focus on how much sex the main character can be involved in.

That’s not, at least to me, erotica. It’s certainly not using a character to their fullest, telling their story, and that of those they encounter.

Brandy has lost count of how many years she’s been a succubus, but she’s not ready for what so many years will bring. She’s about to advance to the status of Succubus Supreme where her carnal desires will suddenly double and a couple of extra abilities will surface. Let the fun begin.

Brandy has been a succubus for a very long time and now she faces a change within herself that few other succubi have encountered. Becoming one of the most power succubi there are means that her needs change, she isn’t going to be exactly who she was before. The questions are many, the answers are few but one thing remains, the overwhelming need.

While the story sounds interesting and Brandy herself is an interesting character, the problem with this work is that it feels very unfinished. The story rushes from one sexual encounter to the next, the focus being on each of those moments, and it leaves a lot of story plot and development laying aside forgotten moments after that appears. The story moves rapidly from the first word, not allowing any time for Brandy to reflect on this, to use what she’s learned as a whole. Her past isn’t told well, this universe’s succubi are fleeting in their depth and existence. It’s very much as if there are entire blocks of story missing.

Scenes snap from one to the next, the dialogue is very uneven and sounds very wrong at times. One scene where Brandy learns something useful is so vague and almost meaningless that it feels like it was dropped into the story as an afterthought. The point of the work, overall, is to put Brandy into as many encounters as possible and not a lot more.

Brandy as a character is interesting, but her powers “happen” for the most part, there’s a bit of mind control which works, but could have been a lot better than it was. Brandy has a futa aspect as well, as do some of the other succubi that appear, but it feels like an add-on to the story. The work seems to be lost as to what to do with Brandy beyond her “being a succubus and having sex.” That didn’t interest me.

The erotica didn’t have a lot of heat I felt, the encounters weren’t much more than a series of adult movie scenes overall. Brandy’s focus, and the erotica, is mostly on her being a futa, women fawning over her and Brandy having her way with them before the scenes end in an over the top fashion, then Brandy moves on.

Compared to the other works by this author, I think this is one of their weaker stories. There’s no passion, there’s no past, little meaning and Brandy thinks more with her sex than her mind. Beyond that, the storytelling is scattered, uneven and in the moments when a story could be told it’s passed over quickly, left behind for the next woman that Brandy bends over to have her way with.

I wanted something more than a succubus who was having a lot of sex and that didn’t happen. It really could have, there’s so many points at which there’s a tease of an idea, but it never comes even if Brandy, and everyone else, does. The work needs a rewrite to expand on Brandy’s past, present and possible future. There needs to be more told about Brandy as a person than her being an insatiable succubus. It’s a shame to say, again, how disappointed I was knowing how this author has written other, far more, amazing things.

The work reads as being unfinished, the story leaves much to be desired and told. There’s more time spent on the sex scenes than there is on explaining what’s going on. Brandy’s past is skimmed over, her past sexual partners are in the story, but not part of it. Why she’s evolved isn’t explained, how that matters isn’t as well. Overall there’s just so much story that starts, but doesn’t get anywhere and that’s the biggest issue I have with this work.

The work needs to be rewritten to expand on the many, many stories that Brandy mentions. This work reads like a summary of something far longer and better that didn’t come to pass. Perhaps it’s a snapshot of an idea that the author didn’t bring fully to fruition. I’m just so disappointed and I really didn’t want to be.

There is a story beyond Brandy’s dual nature, her sex drive and the moments that brings. Getting to that story would have made this work so much better than it is.