A Review of Bloodrites by Kathi Huggins

Darling… You need a better costume.

A Review of Jay Hammer Meets the Succubus by Alan Simmons 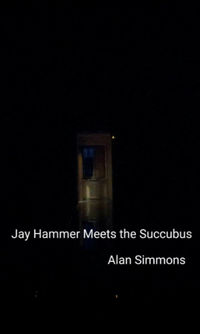 A review of a short work which I thought had an interesting premise, even if the book summary really didn’t seem all that interesting up front. The writing needs some work, the erotica didn’t quite attract me either. But what did was the characters, even if their stories weren’t really told as much as I’d like them to be. Teasing that there’s something more than what’s been told can make a story more, but not spending the time to make the work read better is a shame.

An insufferable pornographer and his close associate have their lives changed forever upon contact with an enigmatic starlet.

The thing is, Jay isn’t really interesting and he’s not really central to the work. Miles however most certainly is however. It’s Miles being so central, the narrator to what happens, which begs that more be told about him. But that doesn’t happen in detail. There’s a lot of hints, some of which I’d like to have seen in some kind of flashbacks, but they aren’t. If Jay is the bland side of this work, Miles is so much more interesting and I really liked him as a character.

That brings me to Topaz, one of the three succubi of this work. She’s a mystery overall, but the sheer presence of her character overwhelms the work at a few points. I didn’t mind that really because her character is focused and feels very real overall. Jay is a shadow, Miles is a window and Topaz is what’s seen outside. She’s not stereotypically a succubus, there’s a certain belief and honour within her. The events that unfold towards the climax of the work take a toll on her. But beyond that her, and that of her succubi sisters, almost enthralment of Miles points towards another story to be told and I wish the author had gotten further than they did.

There’s a really good story idea underneath the porn theme, a character that didn’t connect with me. Topaz and Miles have something about them I really liked and I’d like to see this work turn into a series to know what happens next. The author needs to take some time and rewrite the story to smooth out some of the mistakes and oddities, for one. It would be nice to slow the story down a bit, telling more about the characters rather than rushing through it all. Doing that would make this a really good opening to a longer book, or a series of shorts. I think that’s something to consider.

The work needs a serious editing for all of the missing words and grammar issues. Beyond that, some of the dialogue needs to be more focused and more representative of who the characters are because it gets lost at times.

In spite of the issues, I think there’s a good basis for a series here, to tell more about Topaz, Teresa and Daisy, not to mention an entire succubi society to explore. Mile’s future, what encountering the succubi means to that, really interests me. Beyond that, telling the story of what comes next, how things might change, and, at least for me, the really interesting idea of an adult movie company entirely made up of succubi that aren’t stereotypical would be a good thing to explore.

Most of all, there’s the question about Topaz herself. There’s something about her that almost was said, but didn’t quite come out. That mystery is the one that stayed with me well after the lukewarm erotica and uneven writing was done.