Succubi Image of the Week 475

A Review of My Lady of Hell: Contract with a Succubus by Melissa Miranti

A Review of the James to Jamie series by Zayna Noble 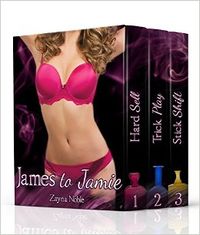 Succubi seem to be appearing more and more in stories about gender transformations of late, but that comes with two possible outcomes. Either the succubus is part of the story, or she’s at the edge of the story and not really all that involved. The former is, for me, more interesting. Having a succubus part of a story, only fleetingly, does not make the story a succubus story as a whole.

A review of the James to Jamie series by Zayna Noble this time on the Tale. The series is made of three works, but as they are available as a collection, I will review the series as a whole rather than the individual works by themselves.

There are some gifts that are given with the hope of understanding, There is the expectation, or the hope, that something better comes from the gift itself. Sometimes that gift turns out to be something more than it was meant to be.

The complete James to Jamie collection:

James has a secret desire, a persona that he wants to become: Jamie, a busty blonde woman! His visit to a magical potion shop is his first step on changing his gender, seducing his roommate, and opening up to new desires and kinks he didn’t even know he had…

A story about needing, but that needing a succubus to make the need be true. Perhaps not in the way expected, but most definitely fulfilling a need. For isn’t that what succubi do? See into your needs, find a way to make them real? But what happens from there is your problem and the bill might be more than you expected it to be.

While this work has a succubus as one of the main characters, she isn’t what the story is about. It revolves around two characters desiring a transformation and Lala, the succubus of the work, is the one to make that possible. She’s a store keeper of dreams, wants and desires in a world where the supernatural is an everyday thing.

That part of the story really isn’t explored, it is simply taken as being normal and the work continues on from there. I loved Lala dearly for her bemusement, the suggestiveness of her expression and actions, but most of all I adored her making the other characters explore their hidden desires through the series.

There’s actually a good balance between erotica and story for the most part in the work, though when the erotica comes into play the story is pushed aside for a time. Eventually however the development of the characters comes back and they do develop, grow and discover who they are and what they desire.

Taken as a series, there’s enough time for character development, telling the story, exploring the characters in all of their forms. There’s even enough time for Lala to manage quite a lot of teasing, seduction and fun of her own. The single thing I think was missing came to the skimming over of the universe, how it came to be that having succubi being an “ordinary” thing happened. That should have been explained a little bit for the sake of completeness.

Interesting characters, a story which holds true to itself. The erotica in all of its forms plays well and I liked the work quite a lot. I just wish there was more detail about Lala beyond her being sexy, smart and seductive. A succubus is more than that and Lala does portray that well.

I liked Lala for her style, her bemusement and how she acted as a succubus as a whole. She wasn’t the central character in the story of course, but she made everything happen. I’d like a story about her alone, perhaps telling how she decided to get into the business she is in. I think that would be quite the story to tell.