A Review of the James to Jamie series by Zayna Noble

A Review of My Lady of Hell: Contract with a Succubus by Melissa Miranti 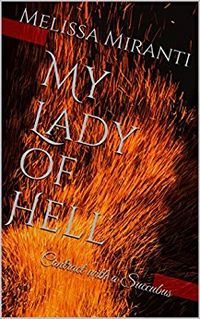 My Lady of Hell: Contract with a Succubus by Melissa Miranti

There are some book summaries that offer up a story that seems like it will be interesting. The promise of something a little different or perhaps the hint of a character, or characters, who’s story turns towards the unexpected. Offering up something that seems like it should be a long, winding path towards the climax, but instead turns into a story that doesn’t quite seem to know where it’s going until the very last, is a bit of a problem.

The thing about succubi is that they know what a soul fantasies about, would do anything for. Given that, within the framework of a story, the succubus, whoever she is, should know exactly what she wants as well. What happens when neither they, nor the soul they encounter, aren’t really giving that need, but instead only toys with it?

Long before the human race began its conquest of the Earth, the demons kept watch over us, and were able to sense which of us would serve them best. Many humans had latent abilities and desires that fit with their plans, and the demons would take these individuals down to Hell. But choice is the only thing sacred in Hell, and no matter what, a human could refuse to serve.

The demoness Cereina was the greatest of all succubi, and though she has power, she needs sustenance. Jared, a human with an attraction to demonic women, and a possible source of magical energy for Cereina, presents a tempting target. She needs to ensnare him, and convince him that serving her is the right choice to make.

Jared fantasies about one thing, and one thing only which brings him to the attention of Cereina who simply cannot ignore such a tempting morsel offering themselves to her pleasures. The delights of a soul’s needs are something delicious and Cereina does so dearly want to devour this needing soul and make him her own.

From the summary I really expected something of an involved story that told something of Cereina, about Jared’s wants, the way things worked in Cereina’s reality. I was hoping for something in which there was some character development, a succubus that was something more than just being dominant, overpowering and pushy. Overall that really didn’t happen, which was really a disappointment.

The single problem with this work is the rush that things happen as the story is told. There’s not much time spend in developing the characters, telling of why things are happening in any sort of real detail either. Cereina’s demands upon Jared are held to her demand he cave into her domination over him, and that didn’t work for me on a lot of levels. It’s a shame that there wasn’t time to really tell more about Cereina beyond what she looks like, her dominate attitude and a bit of a hint about her world and what happens there.

In the same way, Jared’s not really taken to the point of him being more than a plaything overall. The opening offers something, but it’s drowned out by a scene of self-pleasure that leads very quickly to Cereina making her appearance. As that happens, Jared’s not a character so much as a doll for Cereina to play with, and I really wish he’d been more present in the work, a real foil to Cereina instead of what he turns into.

The erotica is a single hot flash between Cereina and Jared, which for me didn’t have a lot of heat in it because of how fast the scene played out, the real lack of a connection between them as well was a problem. I’d have liked that scene to be more seduction than it was, first, and as well I would have liked the submission aspects to be more than the fleeting moment it was.

The dialogue needs some help, it’s a bit flat, not sounding quite right at times and I think that having more of a building up towards the climax would have made the story a lot stronger as well. the work is far too short for what the summary promised as well. I’d really would have liked to see Cereina in Jared’s world, drawing him in slowly, having a series of encounters before revealing herself, then continuing with her temptations with him. That feels like the story that would add what’s missing here. The background, the attraction, and the needs each of the characters have beyond the sex itself.

The book summary promised what I thought would be something interesting, but the actual work didn’t manage to get past the beginning to find the middle and then collect itself into an ending that meant something. The work, much like Jared, was lost within itself and by the time it found where to go, the rush to the ending left so much story behind never told.

Letting the story develop, perhaps by making the story about more than the one single moment that it turns around, would have added a lot to things. Cereina is interesting, perhaps the author will come back to this work, adding to who she is, and why things turned out as they did.

That, I feel, is the missing piece that would bring this more towards what the book summary promises.