A Review of Ravaged by the Incubus by Lex Templeton

A Review of the Taken series by Lee Clarkson 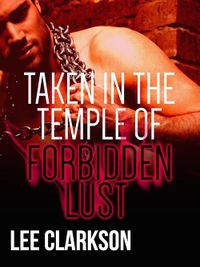 Taken In The Temple of Forbidden Lust by Lee Clarkson

The works are specifically focused on male domination over male submissives, which I thought was interesting when I started to read the telling of these stories. My problem however comes in that there’s a level of pain and suffering, not to mention abuse, which took away what otherwise was some very good storytelling overall.

The arrogant sorcerer Saerlin Wyvernwood is so confident in his abilities that he’s decided to take on a deviant pleasure cult all on his own. In the midst of plundering this temple he runs afoul of its unholy guardian, a demon who can’t wait to sink his teeth into the sorcerer.

Demons are summoned and the summoners find themselves not being the ones in control as they had thought they would be. One must be the dominant, another the submissive, the question is what forms that submission takes and who, in the end, has to pay.

Overall the characters have depth, there’s some plot and at times the erotica has some heat in the telling. There are some characters that are one-dimensional in their thinking, in why they do things, or what they desire however. That said, I didn’t really care for the dominant incubus or incubus-like characters overall because they weren’t quite written with what felt like a good understanding of how a dominant would act with a submissive.

The series is male centric, both in themes and erotica, and there are some moments where it works well. I didn’t enjoy when the submissives were hurt, in pain or suffering however. I don’t personally subscribe to that aspect of D/s relationships and when it appears I find it very difficult to enjoy the story it appears in.

The works are very short, there’s very little time spent in developing the characters or building a story to support them. The works tend to start out well, having a story to tell, but the moment there’s a hint of a male submissive being put into their place, that story is pushed aside for the erotica, which didn’t hold heat for me.

I’d have liked more plot, more told of the characters. It would have been nice for there to be a willing submissive giving themselves to their Master in a way that didn’t require them being broken, either physically or otherwise. Abuse of submissives isn’t something I like or appreciate. It’s a shame that the story couldn’t have found a better way to allow for willing passion than forced ones.

Overall, the main thing that bothered me was the harshness of the characters, the suffering and abuse that the submissives had to endure. I personally don’t enjoy that sort of story and as such I found it very difficult to find my way into the series.

I’m sure there are some readers who will enjoy the series for what it is, and while the dominant male over a male submissive has some appeal, there comes a point where the heat can’t overcome the hurt. I’ve read other works in which the D/s relationship is told more fully, more robustly and this series don’t come up to that level.

Again, it is a matter of taste, my past experiences colour my view I freely admit. It’s a shame that I couldn’t find my way into the story because I did love the submissive characters very much. I just didn’t like how the story took them in directions that made me shake my head in sadness.