Succubi Image of the Week 474

A Review of Demon Hunters by William Harper

A Review of Her Welcome Intruder by Anthea Renard 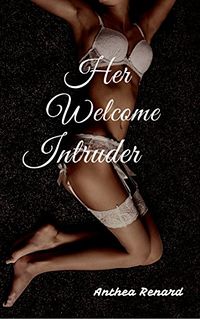 Her Welcome Intruder by Anthea Renard

There are many different definitions of erotica. Some, like myself, prefer a lighter more passionate blend rather than something harsh or painful. That’s a matter of taste of course, we each like something different. However, there is a point in the telling of a story when the erotica isn’t really erotica, its more abuse of a character. Then there isn’t really any heat to be seen I think.

There are things in the night that play upon our fears. They use that fear to warp one’s senses, one’s self. It can drive events to unfold towards a release that comes with the memory of pain. Some feed upon that, some need it, and some find they cannot ignore the need itself.

She’s a well-behaved woman waiting for the right man. She lives alone, but lately she just can’t shake the feeling that someone is watching her…

Then one night, she receives a mysterious visitor. He is unexpected, but he is far from unwelcome. Over the span of one long night, he will dominate every part of of her in a rough, steamy encounter.

A woman tells of her encounters in the depth of night with a creature that takes from her and leaves its marks upon her to remember through the day.

The work is told in first person and as such the main character’s name is never revealed, only referring to themselves as “I” throughout. As such, there’s really little told about who she is, a very short and limited description of the character comes in the work as well. In the same way the incubus character, or at least it seems to be an incubus considering their actions, is never named, nor is their physical description ever discussed. What this means is that there’s really no connection with the characters as a result.

The plot, such as it is, revolves around the sexual encounters, all things leading to that. It’s rather thin, it holds together just enough to connect to the erotica and give it a reason for happening. But that, along with the theme, and the monotone voice of the main character throughout, didn’t appeal to me very much.

The work is very short, as a result there’s more focus on the sex than the story. I would have liked more story, a better connection to the main character, even if that was only her name. As well perhaps more heat rather than the oddness of what happens in the story would be helpful as well.

Really it comes to the question of abusing a character and the character falling for a reason never explained. It’s not a way to heat in a story, it’s more of a way into confusion and wondering why things turned out as they did.

There was really no heat in this work for me as overall the erotica felt forced. It was less erotica than it was something like abuse for the main character to deal with. While that was borderline, the result of the story didn’t really work for me at least.