Succubi Image of the Week 473

A Review of Making Love by Aidan Wayne

A Review of Perdition by the Dashboard Light: A Succubus Seduction Tale by Lucian Carter 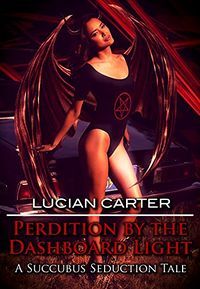 Perdition by the Dashboard Light: A Succubus Seduction Tale by Lucian Carter

There are certain endings that give me pause. In the case of stories with either succubi or incubi, there’s a tendency to add a twist at the end, something to add a bit of shock value. It’s very rare that works, overall it’s a bit of a waste of effort. If the characters cannot support the story, if the author feels that adding a little jarring moment will make the story more, I really don’t think that it does.

There are many different kinds of temptation. One’s own selfish temptation can bring about more than was expected. But temptation is a two-way street and you need to look both ways.

A wish brings temptation in the form of a succubus to a man. How far will he fall into her clutches and will he even care when she gives him everything he wants and more?

Delilah, the succubus of the work, reads a bit odd, a little strange. She claims to be a succubus, is very clear about what will happen if she gets what she wants. The seduction is a little thin, really she takes control and bends the main character to her will quickly. It’s unclear who she is beyond being a succubus, her focus being on making the main character submit to her tender mercies and beyond.

There is a twist ending and at least for me that really took a lot out of the story overall. I didn’t see the point when all that came before made it quite clear what would happen. The added shock value didn’t really add anything, mostly it dampened what heat there was. The author might have been better served by ending the story two paragraphs before they did.

The characters are thin, almost one-dimensional, Delilah is less a succubus than she is a tease and a manipulator of desire. The main character is a shadow with no real form or purpose. As a whole this is a quick hot flash that makes some heat, but doesn’t have a story beyond that of sucking Delilah’s prey into her clutches.

There’s more here, certainly telling more about Delilah herself would be a good place to start. Her entire character seems more of a charade and finding her beneath that might be the better story to tell.