A Review of Perdition by the Dashboard Light: A Succubus Seduction Tale by Lucian Carter

A Review of Making Love by Aidan Wayne 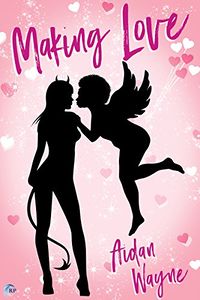 It is February and as such quite a lot of Valentine’s Day themed stories are appearing. a number of them having either, or both, succubi and incubi as characters in the works. Over the next few review days I’ll be reviewing a small number of these works, some of which are funny, others are sexy and there are some that are just delightful.

Succubi are not supposed to be able to find love, so many believe. However, in the search for something more than they are, the idea of love isn’t an impossibility. It’s a possibility. One that calls out, asks to be heard, and sometimes, making what seems impossible, so very much so.

Carla the cupid is an excellent shot, but her chemistry is so bad that most of her matches don’t last. Her dream is to shoot a True Love pair, but until her scores improve, she’s relegated to the Puppy Love division of Aphrodite Agency.

Leeta, a succubus, is looking for a True Love match. Which is highly unusual, as most succubi are aromantic. But Aphrodite Agency — her only hope — turns her away because the receptionist can’t believe she’s not just looking for an easy meal.

Carla agrees to take Leeta’s case on freelance. She figures it’s a win-win: Carla gets to put a succubus’s True Love match on her résumé, and Leeta gets to find her True Love! Except as Carla tries to find a match for Leeta, she finds herself maybe . . . relieved when the matches don’t end well. And Leeta seems to be getting pickier and pickier. Things will never work out until Carla learns enough about chemistry to figure out who’s truly best for Leeta, and until Leeta can admit what — or who — she truly wants.

Carla is trying her best, trying to be the cupid she believes she can be. But there’s a few things getting in her way and that’s starting to wear upon her. But when Leeta appears, looking for love, and then being told there’s no such thing as love for succubi, Carla takes it upon herself to help Leeta find that love, even if that puts her role as a cupid on the line. But then, she’d do anything for love, even that of a succubus.

The work is a story of romance, self-discovery and the realization that sometimes what you need is right in front of you, you only need to accept that it is real. It isn’t erotica, there’s no entanglement with the two main characters in the work. There are wonderfully intimate moments, which as they flow into the characters, give life to them both. The mixture of innocence in both is achingly warm, but sad at times as well. While the story is told from Carla’s perspective, there are flashes of Leeta’s internal struggle to come to terms with herself, with figuring out what love is, what it means to her, and why the need is so dearly strong.

Leeta is a very strong personality, quite clear in her needs and thoughts. At times that does build a wall between herself and other characters, but then in the context of the story, what she deals with everyday, and what she wants, forces that upon her. The insights of her fears, her search for something more is quite telling. Beyond that, Leeta’s decision to be more than “just a succubus” and turning herself away from the easy path to something far more difficult, but infinitely more rewarding held my attention.

Carla is, in so many ways, a delight, but at the same time some of her more innocently lost, but trying to help, moments, took the story off into possibly more self-incriminations than self-understanding and I really wish there’d been more growth to Carla by the end of things. That’s not to say she didn’t become so much more than she was, it’s more that her hesitations remain. In time I’d expect her to be more sure of herself, to know, fully, what it meant to be a cupid than she did.

The universe itself is amazing, the little details dropped in at times really begged for stories to be told, but remained teases. I’d love to see more in this universe, more of Carla and Leeta as well, but then there are two other cupids who, honestly, I think needed to be explored more as they both seemed to have their own stories to tell.

The writing is wonderful, Carla’s emotions are so very strong, Leeta’s personality shines throughout. But most of all, it’s the slow discovery of who they both want, coming to terms with that, through the highs and lows, that brings out the best here. If there’s one thing that didn’t quite work for me it was the moments when Carla’s self-doubts seemed to overcome all else. I think that sometimes the time spent on that fear took a lot from her.

But the little flaws don’t take away from the story, in many cases they add needed depth and with this being a romance, that matters. Romance told well is a wonderful thing, and this work tells that story wonderfully. A joy to read, characters that are captivating, and in the end, a revelation that felt right.

A lovely and sweet romantic story that’s so dearly innocent in so many ways. Leeta is a wonderfully deep character, Carla is a dear in her need to help, to love and the two combined are a wonderful story of love in all of the forms it can be.

I’d love to see what comes next for both Leeta and Carla, how their world, their lives and love changes and becomes all they deserve. It’s so rare to have a succubus story in which there’s actually very little in the way of sex, but so much focus on the delights of intimacy. The difference, always, matters when one discovers love.