Thinking of You by TeraS

A Review of Succubus Called: Part 2 by Blair Barrett 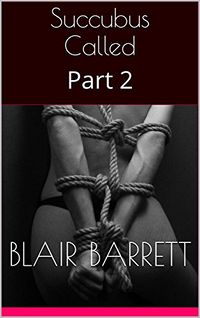 A review of the second work in the Succubus Called series today on the Tale. You can find my review of the first work in the series here where I shared how much I like the story, how the main characters Cassandra and Lilith appealed to me. The second work in the series builds quite well upon what came before and offers quite a lot of character development that I loved. But the mystery remains and avoiding telling all has kept my love of this work, and the characters, as strong.

The truth of those you encounter isn’t what they look like, but rather the soul within them. Sometimes what that soul needs, more than anything else, is someone to love.

Cassandra had been rescued, but does her rescuer have her best interests at heart? Dangerous creatures stalk her, and the only thing standing between her and them is a 191 year old succubus.

Cassandra finds herself drawn a little deeper into Lilith’s life, but as well, she discovers that what she desires can be given, for a price. But that price isn’t the problem, it’s dealing with newfound desires, released into the world. Given that Lilith is a succubus, those desires can be made reality for them both.

I feel that this work is somewhat stronger and more involved than the first in the series. There’s more of a direction to events, there’s quite a lot of character development for Cassandra in many ways as well. For Lilith, there’s a bit less for her, but much of that is overcome by revealing more of her personality and some of her secrets. In the same way, while Cassandra undergoes a transformation, she doesn’t lose her charm, attitude, or personality. She’s evolving as a character, searching for who she is and what she wants most of all.

Much of the story tells of their adventure, some of Lilith’s abilities, an aching threat they need to overcome which then leads to a choice that has a telling effect on Cassandra. That change is physical, not mental or personality-wise as a whole, which I was thankful for. The author has invested far too much into Cassandra to just throw all of that away and I’m very pleased they did not.

The humour comes out quite a lot more in this work, the repartee is a delight and I could imagine the smirks and expressions on both characters as events came and went. It’s a fulfilling story, offering a lot, and I hope that continues on. Most of all, Lilith, while a succubus, has all of the appearance of being something different from her wings to all she is. Expanding on why things are needs to happen however as the teases of the past are quite heavy here and the payoff needs to be.

How the story is unfolding is a real delight, mainly in how both Cassandra and Lilith are trying to figure each other out and what’s going on exactly. The changes that Cassandra has been through haven’t changed who she is, nor has Lilith become other than who she seems to be. Holding onto the soul of both of them made the moments of laughter wonderful. I do look forwards to seeing what comes next, I feel like there’s something coming, not the least of which is the mystery of Cassandra herself. It’s more the question of who, really, Lilith is, and what she desires too.