Succubi Image of the Week 472

A Review of To Summon a Roommate by Deedee Morgan 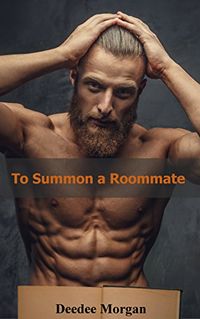 To Summon a Roommate by Deedee Morgan

Making a deal with a succubus or an incubus never seems to be a straight forward thing in most stories, There’s a twist, something missed, and things go very bad for the one making the deal. But what happens when the deal comes down to something very simple? What if there’s no ulterior motive? What happens then?

The art of the deal is something that can be frustrating, Arguments, fighting and worse can get in the way of what seems to be a simple need. However, when need overcomes all else, the deal sometimes can be quite easy to make, and sometimes paying the rent can take many different forms.

Caitlyn’s mom loaned her a book, her grandmother’s old spellbook. One page in particular catches her eye, but is summoning a demon a good idea?

Caitlyn’s in a really bad mood, mostly caused by her boss and her situation. Being an empath has its downside and she’s in a really down mood. Rediscovering a book her mother loaned her, Caitlyn finds a spell to summon an incubus. Taking the chance, it works and then the negotiations begin. Starting with sharing the rent and then the added benefits.

It’s a quirky and fun story in which the two main characters, Caitlyn and Baz seem to play off each other really well. There’s a connection between them, a need from each, that gets played on through the story and leads towards the obvious point, which is they becoming intimate together. But there’s a lot of time spent with telling about Caitlyn’s life, her thoughts. There’s a good deal of time spent in fleshing out Baz’s personality and thoughts which together makes this work more than just a little hot flash with some heat in it as erotica.

With all of the background that Caitlyn talks about, there’s a vast number of plot threads that could come from her decision to summon Baz. But the story is short, leaving these as ideas and thoughts and not much more than that. One of the largest ones being what Caitlyn sees as possible implications of her summoning Baz. This is a very large question, but as the story ends before the aftermath can be told, that’s never brought out as it might have been.

Baz himself is a bit of a mystery in that he claims not to have been on Earth for some time and yet speaks in a very modern tone and slang. That said, he’s thoughtful, not crass, and isn’t a stereotypically evil being. There’s something different about him, but that isn’t really explored much either. His main purpose is making a deal with Caitlyn, then sealing that deal in the usual incubus way, which for Caitlyn is quite a lot of fun.

The erotica is a reasonably hot flash that isn’t silly or impossible in what happens. There’s tenderness, passion, and while Baz does become somewhat dominant in the telling, and Caitlyn enjoys what happens, it never falls into being something that makes no sense with Caitlyn’s personality.

While the characters are interesting and the story is written well, the length of the work is far too short. The ending is slightly abrupt and left me expecting more than it is. The author might have been better served to double the length, develop both characters more and tell the wider story that they kept hinting at, but never really developed.

A unique story with two characters that aren’t what one might expect. That’s a good place to start, but leaving a lot of story in the wake of getting to the erotica is where this work is lacking somewhat. There’s more to tell, seeing where things go from where the story ends would have been nice and it would have made for a better story overall. Perhaps there will be a part two sometime?