A Review of Incubus: A Visit From Hell by Marco Chambers

A Review of Futanari Serves her Sorority by Jocelyn Saragona 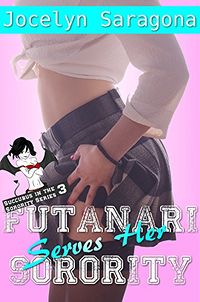 It’s been a little while since there’s been something published in the Succubus in the Sorority series by Jocelyn Saragona. While the first two works in the series I found to be disappointing, and you can find those reviews here and here on the Tale, I had hopes for something better to come.

With the third work in the series, the one thing I really wanted to see came to pass and that was Sharis actually having a life. For her to have things to struggle with, trying to come to terms with all of the things that were pulling on her, both within and without. That to me is a story, it doesn’t take a multitude of sex scenes to do so. Getting to the core of who Sharis is makes for a far better story.

Succubus futanari Sharis works as an escort like the rest of her sorority. Between classwork, clients, and the sorority’s domination sessions, Sharis almost never sleeps! She’s even been with her history professor’s wife -and she’s worried that he knows. Soon, the sorority offers a new rear entry service to their rich, regular, clients and Sharis is called on to help train an endless line up of volunteers. Yet her duties conflict with her perfectionist passion for learning, and the only way out is to break the rules. Sharis loves her history professor too much to cheat, but he’ll never accept a late paper either. With pressure at both ends of her life, Sharis might fail an important class or offend her awesome sorority; and neither option looks good to her right now.

Sharis is finding herself pulled in so many directions she doesn’t know which way is up. If it isn’t her college, it’s her sorority. If it isn’t her friends, it’s her needs. The world is spinning out of control and something’s going to give, whether Sharis will manage to pay the price is another thing all together.

Unlike the prior works in the series, Sharis is the central focus of this work. Everything turns around her, every character pulls on her, every moment is one that comes from her. There’s not a moment within all of that were she can gather herself, find a moment to rest. Burning the candle at both ends is one thing, but she’s throwing the entire candle into the fire. That struggle is telling on her, there’s a real feeling of being lost, trying to manage as she can. But she still needs to give to her friends, obey her sorority, and along the way, manage to have a little sliver of what she, herself, desires.

As things unfold, Sharis, as a character, develops in a way that I’ve been hoping for. She’s been rather static throughout much of the series and here she can’t help but have to confront all that’s come before. The past books had events which now come to press on Sharis, force things to happen and its in the more human moments, when she’s truly herself, that my heart went out to her.

The writing is much better in this work than the prior ones, though some editing still is needed to clean up some dialog and as well remove a few scattered spelling mistakes. While Sharis grows as a character, I felt that much of the sorority didn’t. There’s a disconnect between Sharis and them, an important one, and it is, for the most part, ignored by those around Sharis. When push comes to shove, it’s a shame that they think more about themselves than they do about Sharis.

I would have liked a bit more about Sharis coming to terms with herself, not just emotionally, but more that she sorts out what she wants. That’s still muddled, but it’s getting better for her. At some point she’s going to have to make a choice and that’s going to be interesting. Nonetheless, by far, this work is the most involved and most revealing of the series by far, I hope that continues because telling Sharis’ story brings out a work that’s a lot more interesting than just the sex.

Really it is the best of the three works in the series, mainly because it tells a story about Sharis more than it dwells on her being a futa succubus. That leads to a lot of character development, a reveal of what matters to her the most of all. Getting past all of the erotica and digging into what matters to Sharis, what she fears, needs and desires, is a telling story.

The question is what comes next, for there’s a telling comment made that foreshadows the next work to come I think. I’m hoping that should what I think will happen does unfold that it wouldn’t be for the sake of the erotica, but more to ask an important question of Sharis herself. What’s important to you, why is it, and are you really willing to do anything?

That question, I fear, will result in Sharis facing some of the darkest moments of her life.