A Review of All That She Needs by Anya W. Vossand 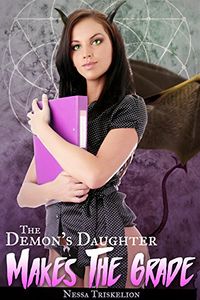 The Demon’s Daughter Makes the Grade by Nessa Triskelion

A review of the third work in the Demon’s Daughter series this time on the Tale. I’ve reviewed the prior works in the series before and you can find the first review here on the Tale, and the second can be found here. Overall Elodie’s story has been interesting, but missing something and a lot of that has to come from the lack of real character development for her. There’s more focus on the sex than story at times and it’s a shame really. Being that really all of the works this author has released are in the same universe, the succubi being of the same extended family, there could be a lot of story to be told.

Turning the story to look inwards, to see Elodie be more than she’s really been explored to be, is something I’ve been waiting for. The third work in the series, and I really hope it isn’t the last, finally moves things along deliciously. Still, there’s a little question about that to wonder over.

As the author has also released this series, so far, as a collection, I will add an overall review of the series after the review of the third work. I’ll also share some thoughts and hopes for the future as well.

Being a succubus, sometimes you can’t get what you want, till you know what you want. Then the problem because the one you need might be more difficult to have. The having can be more delicious than the wanting and when it is, for a succubus, that’s delight indescribable.

The third work in Elodie’s story is:

Elodie has a problem and it’s more than her succubus nature. Having a crush for a human is a problem, but a succubus having a crush means that nothing will stop her from that crush, and for the one being crushed on, there’s no escape. Elodie’s needs merge with her nature and the succubus comes out to play, and then the fun really begins that Elodie’s been needing for so long.

The work is a bit odd in the beginning because there’s a major shift in Elodie’s personality that happens between the last work in the series and this one. Here, Elodie is in the prime of her power. She’s sure, no longer shy or uncertain about herself. She’s embraced her succubus self, allowing her horns and tail to be seen, her seductive nature glowing to be seen. It’s a telling change and it made me wonder where that’s been hidden for so long.

That’s been missing for the most part and now having that, there’s more heat, the erotica is more fully realized as well. The seduction of Professor Bell is wonderful, Elodie’s playing of his attraction, her needs and how she reels him into her embrace is just about perfect. This work is, by far, the one where Elodie is a succubus, becoming all she is and delighting in who she is. It’s such a massive shift in the storytelling, but it just works for giving Elodie’s self the room just to be.

The buildup to Elodie’s encounter with her professor was really well done, the struggle he has feels right, seems right which makes the erotica, when it comes to call, ever so much more wonderful and I really liked how that all played out. If it was just the seduction alone, that wouldn’t be enough, but there’s a good bit of storytelling that offers a glimpse into Elodie’s thinking which was as hot in all honesty.

Still, there’s a lot of plots not explored, there’s a lot of plots of the past books not gathered up as well. Elodie’s mom is still a mystery, her job with her aunt is never touched on, her life outside of her sexuality isn’t used to expand upon her changes. It’s a series of lost moments and ideas that, while the tease is there, aren’t used.

But this is the best of the three works, and it made getting to the end reveal all the fun Elodie has become and is. I just wish there had been time spent to explain how she’s changed from the prior work to this one, if that was only a paragraph or two at the beginning of her recalling how she’s changed and delighting in that.

Of the three works in the series so far, this is my favourite of all. It’s Elodie as a succubus, being the temptress, being seductive and sure of herself. It’s something that I’ve been wanting to see from the beginning and it’s lovely to see, even if how she got there is a bit murky and hidden from  view.

There’s a lot of story not told still, the mystery of Elodie’s mom still awaits for one. There’s so many stories left dangling, so much heat not told. Her universe is offered, but not explored for the sake of the erotica. Should the series continue, that really needs to happen.

Thus, in the end, my thoughts remain as they have been overall. There needs to be some focus on building Elodie’s character, telling about her mother, who still is a mystery, and take Elodie from being just a succubus, which she isn’t, and into who she is meant to be. I hope so, because there’s a lot about Elodie I like and would like to see more of. I hope that will be.

We’ll see what the author decides upon, but my hopes will be for Elodie’s mom to appear most of all. That moment, to see where Elodie came from, I need to make things sing. 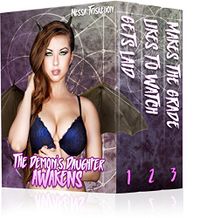 Following the release of the third work in the series, a collection of the three stories was released by the author. Reading them together in a single collection brings into sharper focus some of the issues that the series has, but it also keeps the heat simmering along the way. That said, having the entire story of Elodie laid out leaves me wanting so much more from this character in so many ways.

Being a succubus, especially for Elodie, isn’t about the sex, it isn’t about the teasing and temptations. It’s about who she is, where she comes from, and why. Leaving things aside for the sake of the heat is a bit of a shame.

The collection summary is:

Elodie is a blossoming succubus! She’s tried to repress her abilities, but living in a world where magic is commonplace, why bother? After some convincing from her encouraging mom, El is off on a series of sexy adventures that are so hot that they’ll melt your kindle. She has her eyes on cute college boys, her werewolf bestie, and even her favorite professor!

I adore Elodie in so many ways for her personality, her needs and her wants. By the end of the three works, she’s become a delightfully seductive creature, sure of her power, her wants and how she’s going to go about having what she needs.

But there are so many gaps in the overall story and that’s the real shame here. There are teasing thoughts rarely explored that shape who she is, but aren’t told in detail. Her family is a mist of characters, her personality changing from being timid to suddenly the perfect succubus between the second and third works is a total surprise, if wonderfully so.

There are so many plot threads offered in the series, the most telling for me being Elodie’s mom most of all. She’s mentioned, but doesn’t appear, she’s important, but not part of the story. How Elodie thinks of herself changes, but it’s sudden, happening between books and, again, that leaves so much story not told.

The heat is very good overall, but it’s that last scene in the last book that just pushed the rest of the erotica into the background. Elodie as the succubus seeking her prey was some of the most perfectly written succubus erotica that I’ve read. But why that couldn’t have been given more time to develop, to bring her from a wallflower to a seductress in an overall more smooth and clearly told way I’m not sure.

It’s the singular problem with this series, and overall with all of the other works by this author. There’s so much story waiting and wanting to be told, but there’s a rush to get to the heat, tell that, then end things. It need not be, there’s a real story here, a really good one and the author needs to tell it.

I’m hoping that if this series continues that Elodie’s embrace of herself is explored more. That the story tells of her family, her mother in particular. Then comes the seeming relationship that Elodie falls into in the last book in the series. It’s all really good character development that can really add so much, if it’s used and I really hope it is.

I hope that there’s less jumping around from one encounter to another. Time taken to tell Elodie’s story, to explore her, really needs to happen. The jump between books two and three was jarring and it need not have been. Story, I’ve said many times, makes a lot of heat for me in erotica. The author gets right to the edge for the most part, but hesitates. Of the three works in the series, the last one is, almost, perfect. It’s a shame that it wasn’t.

For the series as a whole I’ll give it three and a half pitchforks out of five.

Elodie is an amazing character with a story to tell. Telling that story needs to happen, to widen this story universe further and tie up the loose ends that are all over the place. Doing so would be a delight, a thrill honestly. That hope remains well after the last page.