A Review of Hell and Damnation by Carolyn Gregg

A Review of Succubus Sundries 3 by Zayna Noble 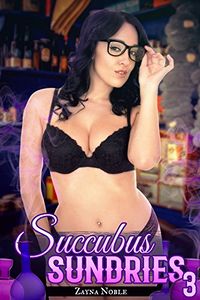 Last month I reviewed the first two works in the Succubus Sundries series and you can find those reviews here, and here on the Tale. My ongoing issue with the series was, and still remains that Lala, the succubus of the series, isn’t so much part of the story as she is drifting along side of it.

While Lala is the plot device pushing the series onwards, the problem I have is there’s a lot of transformations, a lot of erotica, there’s even quite a bit of character development, but there’s something missing. The problem is that Lala herself isn’t all that much part of things and I think that’s a shame. A review then of the third work in the series and there’s a short review of the series overall following as the author has released the three works in a single volume as well.

Abby is back! And this time, she’s brought her boyfriend, Felix. She’s excited to take him to Lala’s potion shop and share in a series of exciting transformations.

Felix is a little reserved. The scrawny nerd has enjoyed the fruits of dating Abby in her new plant girl body and when he meets the succubus shop owner personally, he has a few requests. Both would turn him into a creature twice his size; a buff, beefy minotaur, or a strong, scaled dragon.

Lala is more than happy to help the couple explore their new kinks but this time, there’s a different price. She’ll be extracting a few materials from Felix and using Abby as a guinea pig to test some new potions and artifacts. The first will turn her into a slime girl, transparent, morphable, and blueberry-flavored. The next will change her body into a dullahan, her head separate from her body!

The nerdy couple are being offered a unique opportunity. Would they dare refuse a succubus’ deal?

Abby returns to Lala’s shop with her boyfriend in the hopes of sharing with him the delights she’s found in her own transformation. Things do come with a price and Lala is open to some ideas, but the couple in love will have to allow Lala to get a little something in return. That isn’t decision isn’t a hard one, but for Felix, something else is going to be very hard when all is said and done.

Much like the other works in this series, this isn’t so much a story about a succubus than it is about a series of transformations being tried out. Lala, the succubus of the story, remains a mystery as before. There’s nothing told about her past, what drives her and her character. There are hints and vague ideas, but nothing really concrete to base one’s thoughts upon. I will note that Lala makes one comment about succubi in general which puts things in a way that made me smile however. It also gave, for the first time, an explanation about how the transformations are chosen and how they work.

Abby isn’t all that different from her first appearance and Felix is delightfully nerdy and shy at the beginning. As things unfold the heat between the pair builds, the erotica that comes after the transformations has some good heat, but it felt somewhat rushed in this work, being a bit set aside for the transformations themselves, which there are a lot. The transformation scenes are well written, there are some really funny moments in the telling as well and they are the core of the story overall. That tends to push some needed character development aside sadly.

The ending of the work is rather abrupt and, at least for me, again it was disappointing. There isn’t so much the story moving onwards as it was the story going back to tease two characters about things before coming to a halt. There are some threads to explore going forwards, assuming there will be more stories to be told, and I really hope there are for Lala just feels like she’s a character that’s underused.

Written well, the characters have voice and I did adore them. But like the rest of the series, the story lacks direction for quite a long time and when it finds its way, it has taken too long. The ending left me wanting and I wish it didn’t. Abby and Felix had fun, but at the end of things, nothing really changed all that much from where they started. Lala remains an enigma to be explored and that she wasn’t is another shame for me at least.

The formula is about the same, Lala’s past isn’t explored, the series of transformations seem like they were meant to be their own stories, but didn’t get anywhere and rather than lose them, they were added to this story. There’s a bit more heat, a little smidge of character development, but when the story closes, it didn’t feel like Abby, Felix or Lala were much further ahead than they were..

Sometimes it isn’t enough to have a taste, sometimes the better story is to have it all and see what happens. Perhaps that might be a story to tell about Lala some other time. Hopefully the author will return to Lala, her world, and tell a story about her. Because that mystery is interesting and needs to be told. 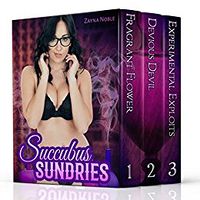 The author released the series so far as a collection called Succubus Sundries: Tonics and Artefacts which I’m going to share a very short review as well.

The work contains the first three works in the series, which tells of those that encounter Lala in her shop, the transformations they experience and the payments which Lala collects from them all.

The series is really cute and fun overall, there’s some nice heat in the erotica, the characters are interesting and aren’t two dimensional either. However, this isn’t so much a story about succubi, overall, than it is about transformations into various supernatural beings.

Lala, the succubus of the series, has a lot to offer as a character, but she isn’t really allowed to develop much more than her personalty seems to suggest. She is a tool for the transformations, a catalyst for the erotica that appears, but what her story is, overall, doesn’t get a lot of time in each story.

While that is because Lala isn’t really a main character, and the stories focus more upon those being transformed, it just left me asking, repeatedly, what’s her story and why isn’t it being explored at least somehow. I did like that at least some of Lala’s beliefs, and that of succubi in general are mentioned. I enjoyed that she wasn’t evil, more fun and mischievous overall, which made the overall story have a lighter tone that transferred to the main characters as well.

I just really want more succubi in a series that has succubus in the title.

It would be nice to see the series continue, the way things ended suggests it might and considering that other succubi series by this author have some connections to this one, it would be nice to see some more real crossovers happen. There’s promise here, but a little less transformation and a bit more succubus would be a delight.