A Review of Little Secrets by Catherine LaCroix

An interesting set of Succubus horns… 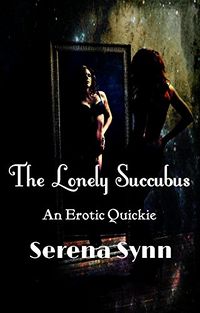 All characters have a story to tell. Sex alone doesn’t tell a story, nor can it talk about a character’s fears, needs, hopes and dreams. It’s up to the story to tell that and the erotica to heat things up at the right moment. There’s a talent to being able to manage that well. Especially when the main characters are deeply flawed.

The past shapes the present. We are that which our own minds shape us into being. Some fears are the stuff that make us become small, a wisp of who we once were. It takes a choice, a need and a desire to see that we are not what we think we are. We are better and better when we can allow others into our lives.

Thanks to her agoraphobia and social anxiety Neridia was a lonely succubus hiding out in the woods. She learned to survive by syphoning sexual energy from the internet supplemented by the occasional snack on a delivery guy.

She was expecting a pizza delivery guy when Pierce stumbled into her cabin.

Sexy as hell and dripping sexual energy he could be the answer to all her problems…and the start of a few new ones.

Neridia isn’t your usual succubus and that’s because who she is was shaped by her past. A choice made, a promise destroyed and the hate within seething. Pierce is an incubus with a real problem, a hope that there’s a way to solve it. The two lost souls meet and then the questions become one of not just need, but want and desire.

While this is a work of erotica, there’s so much more that comes before that moment that makes this something really special. Both Neridia and Pierce have their stories to tell, and in the telling comes a pair of complex souls. They have their flaws, the pain of the past, the needs of now and the slim hopes they have for a future. Their characters are wonderfully strong, vibrant voices in the work and being so, that exploration of their pasts is just amazing.

That isn’t done as an info dump, the method used is inspired and without Pierce, it seems unlikely that Neridia would have confronted her own past and made something of it. There’s need in both characters, but it isn’t sexual alone. While the connection is cleat, there’s more of a need for understanding, a shoulder to lean on, an ear to listen. The characters have soul and that makes getting to the erotica so much better.

The erotica is a lovely hot flash which isn’t silly or unreasonable. While both Neridia’s succubus aspects and Pierce’s incubus ones come out fully, they aren’t evil or nasty. It’s nice to see a story where the characters don’t fall into the :”evil” trap. They are far more than that.

The writing is very good, the characters have depth, The plot allows for them to develop and tell a story. The heat simmers and holds things together quite nicely as well. The work is a little short, but it does have a clear beginning and end which really doesn’t leave too much out and wanting from the story. I would have liked a bit more of an ending, I think it’s a bit abrupt. but it does manage to satisfy overall.

I adore Neridia and Pierce, the story is delightful, fun and has wonderful heat. But most of all, these are characters with flaws, with needs. The erotica doesn’t get in the way of telling that story which makes this work really something special.