A Review of Awakenings by Emma Night

Not really that much of a Temptress or a Succubus Costume

A Review of The Confessionist by B Samuels 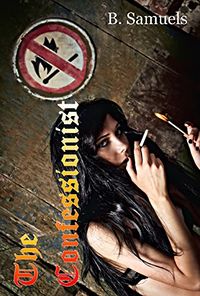 The Confessionist by B Samuels

One of the powers of a succubus is to know what their prey needs and desires. Becoming that, taking them to the release they crave, is delicious. Being able to use words, sounds, and scents to make that possible is a gift. But all gifts have a story to tell, and telling that story is a gift as well.

A sexually frustrated man finds himself locked in a confessional booth with a mysterious woman, one who not only understands his smoking fetish, but also how to use it to release him from his agonies.

A man finds himself at the tender mercies of a woman that knows his secrets. Giving in to her might be everything he needs and fears at the same time.

The work is a very short hot flash which doesn’t tell much about either character. The female character of the work isn’t named within the story, her name, “S” being revealed by the author in the end notes. There’s really no plot outside of her dominating character and what she does to the male character in the story.

There’s a focus on sexuality, sexual desires and a specific focus on smoking as fetish all wrapped into a female domination theme. There’s quite a lot of heat in the five pages and that’s mainly because the author doesn’t waste time telling a story outside of the encounter the two characters have. In doing so the story remains held on that moment and it keeps the story alive when otherwise there would be a good change the story would lose its way quickly.

It is a short story and being so there’s no character to explore, no story to follow. The female character might be a succubus, seems likely to be a succubus, but that’s never clearly said. Her purpose is a little vague and while the ending makes a suggestion of what happens and what she wants next, it doesn’t take the story much beyond the sexual moment that the story is.

As the opening chapter to a novel, this would be an excellent hook, but otherwise it’s too short. The heat makes up for a lot of that however. Nonetheless, more story, more telling about “S” herself would have been nice. There are all kinds of hints and teases, but nothing more. That’s a shame because there is more here. It’s just not explored.

It’s far too short of a story, but while it is, the heat in this hot flash is very well done. “S” seems to be a succubus, there’s enough hints to conclude that. I’ll see what the next work brings and if that justifies this introduction being such a short little thing.