A Review of The Confessionist by B Samuels

A Review of Awakenings by Emma Night 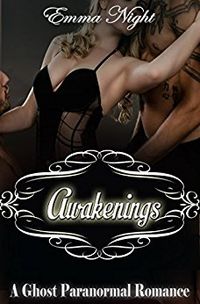 I don’t mind collections of works, really it is an opportunity to read many different stories and be captivated by them. The problem I have is when it seems like the work is one story, offered as such, but then in the pages you find the story you thought was going to be 600 pages long… turns out to be about 60 in truth.

A need when found, can consume us totally. The temptation to take and never stop can be more consuming that the hunger itself. Some dreams are simple, some are needful and then there are the ones never spoken of for the fear of them being true. But in the eyes of a succubus, all dreams are delicious.

Even the best doctors sometimes need a vacation

When Troy cracks the lid of an ancient box found deep in the cave, a strange gust of wind ushers in something ancient, something powerful, beyond any mortal’s understanding. Unwittingly, Troy has released a succubus and the three friends are about to experience the dreams of a lifetime. Dreams that might be more real than any of them ever imagined.

Three men enter a cave and choose to tempt fate. In doing so they release a succubus in need, they being the ones to feed her hungers. But they each have a need, singular and then alone, which she can provide. But in doing so, there is a cost, and it is one that, for her prey, is well worth consuming.

The succubus of the work, Alathea, is a delight. She’s smart, seductive, powerful and uses her powers in some wonderfully hot ways. There’s some mind control, some transformation aspects as well, but the critical thing is that the story doesn’t turn dark, or evil. There’s purpose to her actions, there’s focus in her thoughts and there’s some character development among all of the erotica that was well thought out and played into the story really well.

The male characters are actually rather hard to like for much of the work, really only becoming more interesting and vivid when Alathea takes them by the nose, and other parts, leading them to her sense of what they desire and what she is willing to give them. It’s a shame they are so unlikeable because it remains with them, right through the ending of the story. That means, at least at first blush, there wasn’t any development in their characters and there should have been.

The erotica is very hot, very female dominant, even if the men think they are in control, which they aren’t as Alathea’s powers control the events quite strongly. The ending is disappointing on two things, one, the male characters seeming to learn very little, but more so that Alathea just vanishes, her story not really told as much as I wanted it to be.

There are a scattering of spelling and grammar mistakes, but they are minor ones as a whole. A minor quibble I admit, but with another editing pass might come more story about Alathea, her past, and what she truly is. Light in the darkness is a really good story, it should be really told.

That rating is for Awakenings only, I didn’t bother with the rest of the collection as it didn’t appeal to me. I really think the author should be clear that this is an anthology, that Awakenings is a small part of it. That would, for me, be a better thing to do.

I loved this story, but there’s not enough told about Alathea, the works ends on a point that begs for a “what comes next”. The erotica is wonderful, the story is very good and I loved it overall, but there are a lot of editing problems needing a going over. Telling more of Alathea would be a delight, but I expect what we have is what there is… pity.