An interesting piece of Succubus Sculpture…

A Review of Craving the Incubus by Ruby Thurston

A Review of She’s a Demon by Vladimir Ostrovski 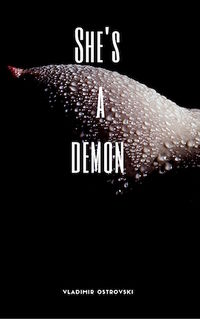 She’s a Demon by Vladimir Ostrovski

There are some stories which never seem to find their footing. There’s never any traction in the plot, the characters don’t do anything save go in circles. There’s a lack of heat, a missing passion in the erotica. Things are worse when the editing leaves a lot to be desired and the overall story just seems to lay there and spin its wheels endlessly.

A story that has a succubus character within it should use that character for something. Suggestions of their powers, of what they want from other characters isn’t enough. The succubus herself needs to do more than just “offer” something. There needs to be a point. Sometimes there isn’t beyond her being the focus of another character’s sexual desires.

Jon is an eighteen-year-old student tortured by the fact that he is still a virgin. His math teacher, a beautiful woman with some demonic tendencies, has plans for him. She has been pretending to be his teacher for months so she could get to know everything about him, so she could make him an offer he couldn’t refuse. And make him her servant, now she knows what to do.

Jon’s life is long moments of nothing intermixed with a desperate need for his math teacher, Mrs. Blaze. An accident on the way to school gives Blaze the opening she needs to seduce and control him.

There really isn’t much of a succubus story as Mrs. Blaze appears only fleetingly, really doesn’t give much to her succubus nature and then the story comes to a close. For the most part the work focuses on Jon feeling sorry for himself, riding the bus, and overall being out of touch with much of the world around him. There’s no purpose to his character, there’s no emotional connection with him.

Much can be said about the overall story as there’s no focus to it, no meaning, no real conclusion, no conflict. It’s a series of scenes that are loosely connected together. Overall the work is relatively boring in that context having no sexual heat, no drive to the characters and nothing to care about or want to see happen next.

Events unfold almost in a train of consciousness and as a result the story becomes confused, aimless and without form. As well the work has a vast number of spelling, word and tense errors that make much of the story almost unreadable and comprehending what happens throughout much is very difficult.

When Mrs. Blaze comes into the story, she’s less a succubus than she seems to be temptation for Jon. There’s a lot of sexual innuendo, some suggestive looks and comments made, but none of that is really succubus like. The only clear point where Mrs. Blaze is seen to be a succubus is when she describes herself as one and goes about trying to claim Jon’s soul.

The conclusion is confused, the outcome is unclear and there’s just no point to everything that came before. There’s almost a porn-like quality to the ending, but that doesn’t help with all else that comes before nor the editing issues.

A difficult read, characters that are thinly written, a plot that doesn’t exist. The only thing that I thought was interesting was the reveal about Mrs. Blaze. It’s an idea worth telling, taking Jon from this moment to something more. But not like this. The author really needs an editor.

There’s really no succubus in this story, mainly because her appearance is fleeting and without any real purpose. The story is directionless, having no clear plot or anything remotely like it. This work reads like the opening chapter to a story and one that does’t hook a reader into the story. More focus, more story, and something more than a half-hearted bit of a hot flash to justify things would be an improvement.