A Review of She’s a Demon by Vladimir Ostrovski

A Review of Craving the Incubus by Ruby Thurston 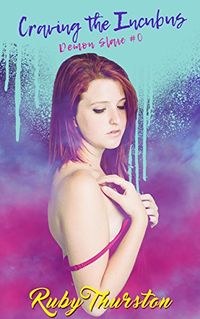 Craving the Incubus by Ruby Thurston

A review of a prequel work today on the Tale. The beginning of a series in which there are D/s themes, the appearance of incubi, and possibly succubi in the future. It’s a unique universe, the themes are very emotional and pointed at times, which are good things.

Zoe is devastated when her childhood best friend, Melissa, becomes the next victim of the lottery–a system put in place to award human slaves to demons who’ve emigrated from the overpopulated hell realm. Moving on isn’t as simple as she expects, and her attempts to research ways to help her friend end up rocking the foundation of everything Zoe understands about the world and herself.

Zoe’s world has fallen apart, Things were bad enough with the arrival of demons on Earth, but her best friend is gone, given to them and she’s alone in the world. Questions arise, she seeks answers, but what she discovers puts her on a path towards something she wasn’t prepared for, doesn’t understand, but can’t help needing.

The series is set in a world where demons have come, taken over, and humanity’s purpose, it seems, is to be used, a bit at a time, for their pleasure. That means, at least from what little is seen in this prequel, that humans become pets, are changed both mentally and physically, their past selves lost through a lottery. It’s an interesting concept, some of the scenes that reflect upon Zoe seeing what happened to her friend, the aftermath left behind and its effects on Zoe are so very depressing and sad. So much so that the depression and loss hangs like a cloud over not just Zoe, but her entire world and that’s a crushing thing to read.

By far, the singular emotion throughout this work is that depression and it does, at times, make this a very hard work to read. There is some heat, but it can’t really overcome the depressing aspects of the story itself. The theme of the erotica varies between some D/s play and a bit of seeming mind control missed with a bit of transformation. But this is all mainly a teasing glimpse. the background and meaning of many of the moments being held aside for, I assume, the first work in the series.

There is an appearance of an incubus in this work, who opens within Zoe something she didn’t realize she needed and that directs her to places she hadn’t been before and to make a choice that she never expected to. It’s the main source of heat in the work, Zoe’s thoughts and her need for finding a bit of pleasure among all of the darkness around her. Personally, the little glimpse of the incubus, called Major, felt rather stereotypical, bordering on disappointing for me. While it makes sense he would be dominant, his actions, attitude and personality didn’t do a thing for me. I’ll hope there’s something more to him, should he return, more so that the themes going forwards manage not to stray into the realm of that one book, and film, that I really dislike that didn’t have a clue about the D/s world, never mind BDSM.

I think there’s a really interesting story to be told, but it feels like this won’t be one in which there’s a lot of joy, light or happiness to be found. There’s a coldness here, it’s one that could take this work very dark, but also might make the series very stereotypical and expected. I really hope it won’t be.

Good characters, the plots is very good, but the depressing moments held me back from much of what came. There’s a lot of promise, Zoe’s story will be a complicated one I expect and that interests me. I hope she’ll still be Zoe at the end of things, because losing her as a character would take a great deal out of the series, no matter how depressing things could be.

The work tells a very good story and sets up the series to come very well. The only thing that took away from the overall work for me was the overwhelming sense of loss that Zoe has. That depression, the need to fill a void within herself was quite hard to read. While it gave a reason, the issue for me was the seeming disjointedness of it all.

This was a prequel work to the series to come, the first work in the series to be titled Milked by the Incubus. the release date was not announced at the time of this review. I’m going to hope that the themes in the series will not be stereotypical, because that will be disappointing. There’s a mystery here, a world to explore. I think the author can manage this and keep heat as well. The trick will be not making the D/s theme feel wrong, or the characters lose their way.