A Review of Dahlia the Demon by Danielle Voelkel

An interesting piece of Succubus Sculpture…

A Review of The Job Swimsuits Her by Zayna Noble 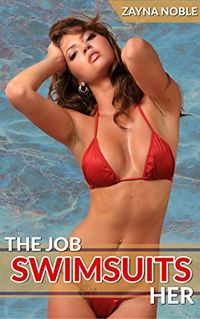 The Job Swimsuits Her by Zayna Noble

The author Zayna Noble has been publishing quite a lot of works with succubi characters in them. Those characters are interesting, I think there’s a lot of depth to be explored, stories to be told. But as as whole, many of the stories aren’t really stories about the succubi themselves, even it the titles suggest they are.

I’ve reviewed several of their works, and I’m quite sure I’ll be reviewing more of them in the future as well. I’ve found, at least for me, that one of two things happens in their works. Either the story is, actually, about a succubus, or it isn’t and the succubus is a means for a transformation, gender of otherwise. When the latter happens, the problem I have is that the succubus tends to be far more interesting than the main character is. The work I’ll review today is one of the latter by far.

Mike is desperate to get into the Beach Party of the century for Spring Break. Only the hottest of hot people are allowed, and past a giant wall is a ratio of ten women to each man! He’s worked his ass off to lose fat and gain muscle just for this! Even so, the party admins don’t think he’s attractive enough to enter.

Thankfully, a friend of a friend hooks him up with a succubus that may be able to help. Not only is Derora insanely gorgeous, she also dabbles in modern magic, enchanting items that can pass on incredible effects to their wearers. The plan: to give Mike a pass to act as a lifeguard for the party. There’s a catch, however. The pass will only work if he turns into a hot girl!

Derora presents Mike with a little red bikini that turns the buff man into a curvy woman! Under the name ‘Mikayla’, entering the Beach Party is a breeze! All seems well until she’s assigned lifeguard duty at the very end of the beach, where not a single hot babe is celebrating.

Enter Ken, a dashing human, and Daron, a minotaur built like a truck. The two men are sure they can keep Mikayla entertained…

Mike wants in on a beach party, but he doesn’t make the grade. Desperate, he comes into contact with a succubus that offers him a way in. A deal made, a swimsuit to wear and Mike becomes Mikayla, a sexy lifeguard who finds herself needing to save a lot of guys in all sorts of interesting ways.

The work at its core is a gender transformation story that has a succubus being the catalyst for that transformation. As such, it isn’t really a succubus story, which is a shame, because Derora, the succubus of the work, has possibly one of the more interesting pasts to tell, but doesn’t. Beyond that, the idea of a succubus lifeguard is so delicious, but isn’t explored. As well, Derora’s personality is wonderful, as long as she is within the story, and it really disappointed me when she vanished into thin air, being forgotten until far later in the work.

The gender transformation is written as well as others that the author has written, having some good heat when it happens. It is, however, a bit rote in that some of the emotional context and reactions read very familiar compared to other works. That said, there is some sense to things, the reasons work, the results aren’t over the top or silly. Mikayla is her own character, there’s some really good interaction before the erotica comes into play and I liked that. She wasn’t just in the pages for the sake of being bent over and used either.

The erotica has heat, about the same as other works, and it isn’t impossible erotica either. The gender swap gets buried underneath Mikayla’s personality, really it’s forgotten, much like Mike is, until the very end of the work. It’s at that point when a question is asked and it was one that I had been wondering about since Derora mentioned it. It would have been nice to see what that deal was, what Mike would be made to do, but it doesn’t happen. The story ends abruptly, offering the question to ponder and leaves the story hanging on that point.

I would have liked to have seen the story continue onwards to finding out what comes next. I’d like to have known more about Derora herself than was revealed. The story isn’t really about Derora, and I understand that, but when a character appears that’s interesting, has personality, teases and leaves the suggestion she’s more than she seems, it’s a shame not to make use of that. Saying there is a succubus in a story, and she’s seemingly very important to it, to me means she has more of a presence than to toss a bikini at another character and then smile as they leave.

A gender transformation story which has some moments of heat, but while that remains a strong point for this author, I didn’t feel like this was one of their better works. More so, teasing Derora, offering a slender hint of who she is, and then ending the work on what is a really important question, left me wondering. I’d like to see a story about Derora herself, or at least to tell more about her. Really the idea of a succubus swimming lifeguard interests me. Perhaps that will be a story we’ll see sometime.