A Review of Red River Song by A. R. Mummey

Possibly the oddest Devil Costume of the year

A Review of War of Lust by Sierra Lee 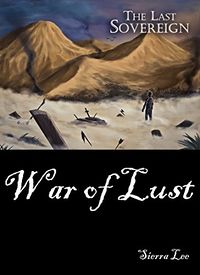 War of Lust by Sierra Lee

It’s a rare thing when Succubi appear in a swords and sorcery story and they are actually allowed to be seductive, use their powers to tempt and cause others to fall to them by lust instead of by sword. I like that theme, keeping Succubi from just being fodder and making them something more.

But it’s a problem when they appear, for but an instant, then are driven away, lost in the background, never to be really part of the story again. As a plot device, that’s one thing. But when one of them is named, there is history between them and the main character, and it isn’t explored it’s disappointing. More so, it’s an opportunity lost to tell more of a story.

The work tells of

A lone warrior struggles to hold out against an army of succubi. He wants to survive long enough to return to his wife, but the enemy would make defeat oh so sweet…

Simon fights in a war against an Incubus King with the most dangerous of weapons at his hands. Legions of Succubi wash over the lands, ensnaring all they encounter. But Simon has one desire, one wish, one need. Tested, pushed beyond his limits, what comes next isn’t what he expected when a cry for help turns into something more.

The work is a very short fantasy about a warrior fighting his way home and the encounters along the way. Simon’s character is complex, interesting, and what drives him is very telling and important to the work. There’s purpose to things, the events that happen and as a sword and sorcery story, it does that well.

The issue that I have with the work is that there are hints of other stories, name dropping of other characters, but those stories aren’t explored, only teased. One prime example of this is a succubus that Simon encounters called Riala. She’s a power onto herself, it’s clear she’s someone important that Simon has battled against before. But she appears for two paragraphs then vanishes into the ether. Simon mulls over their encounter, in one short thought, then the story moves on. Similarly, the Succubi in this work are a major threat, they are said to be so, and yet there is, again, but one short passage in which one succubus appears.

Being that the work mentions Succubi specifically, that Simon is effected by their powers, as are several other characters, it’s a shame that they aren’t more present in the story. The focus here is on Simon struggling to return home, to fight his own lusts, pressing onwards by the force of his will. Being that his is the main character, that makes sense. But along the way, there are side stories and plots that appear, tease, then vanish into thin air leaving little to nothing behind.

In a lot of ways, sections of the work read like a summary of the past, suggestions of the present and vague ideas of the future. It does work, it allows for a delightful erotic scene at the end of the work which I enjoyed, but there was something missing and for me that came to the lack, as a whole, of succubi. The singular appearance of Riala alone just asked for her and Simon to encounter each other, at the least, have a flashback or something to offer a suggestion of who she is. Saying she is a powerful succubus is a start, but needed to be more.

The writing is very good, Simon, his wife, and Linda, a warrior that Simon encounters, are amazing characters without question. The main plot tells a very good story, but the side plots that aren’t explored take away somewhat from the focus that otherwise needed to be on the main one. The work is, again, very short, and honestly I think just from the side plots alone, this work could be four times the length it is. Telling a story needs depth and it’s floating on the edges of this work, I dearly wish there would have been more story, more succubi and, overall, more told of the world and the characters mentioned in passing.

There’s a hint that this is the start of a series, called The Last Sovereign, and I really hope that happens because offering characters like Riala, then really doing nothing with her, is disappointing. In a lot of ways, the story reads like the summary of a quest, skimming over so many moments and events, but never paying off on them. While there are succubi, it is fleeting and honestly more a plot device than anything else. Considering the “threat” they are, telling that story further would be interesting and I hope it is for the promise I see.