Succubi Image of the Week 467

A Review of A Succubus for Christmas by Zayna Noble

A Review of Succubus by Richard Biggsley 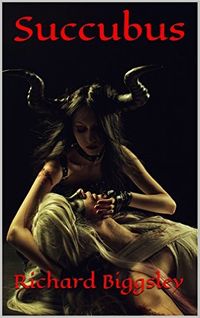 Not all succubus stories are sexy or seductive. There is a darker side which appears from time to time and when it does, there’s a certain tone the story takes. A focus on the more horrific nature of the legend and mythos. If the story is set up in the right way, the characters lend themselves to that storytelling, that works well. Sometimes exceptionally so.

Weary and penniless, Tarikh and Lukas find themselves into the city of limits of Eisinia. Swords for hire and desperate for coin, the pair reluctantly pursue a curious contract: a nearby estate is plagued by a succubus, an ethereal sex demonness, and there’s a laudable stack of coin waiting for the man who can tame and purge her.

Looking for a way to survive, two swordsmen find a request for help. A need to have a succubus removed from a land. Not all is as it seems, not the one asking, or the ones answering. But the call of coin is strong and the call of the succubus is stronger still.

The work is a mixture of medieval with a touch of sword and sorcery mixed together. There’s no magic involved, which means the story is grounded somewhere between the reality of what the characters face and the impossibility of it all. The focus is on the main characters and there’s a lot to be told about them which is interesting.

When the succubus appears, she isn’t a seductive being, she’s a rather darker and more base one. She is a succubus, there’s no question, all of her physical aspects are that of the classical succubus. The character is never named. but considering how she speaks, when she does, it’s unclear if she even has a name.

Where the question comes in this work centres on the succubus herself, how she came to be where she is, why she is there, and how it all ties together. That part of the story isn’t told too deeply for it’s really not the point of the work. The point are the main characters, how they react to events, and the aftermath of them.

There’s very little in the story that can be called erotica, though there is one passage when the succubus appears which is well told and describes things in a clear tone. Much of the story is taken with setting the characters into place, giving them purpose and then seeing what happens next. This works well, but leaves some parts of the story unanswered.

Along with this, the ending is somewhat open-ended, leaving questions about one character and the fate of what comes next untold. It would have been nice to have a little more time spent on the climax of the story, of revealing the truth about what’s been happening and why.

That all said, the writing is excellent, the story and plot are strong. The characters have depth. A strongly written story, but not a work of erotica, this is a story about facing darkness, which is something else entirely.

The ending leaves something to be desired, I do wish there would be something more of a closure to the story. The succubus is never named, though she is more beast than person overall, so that is not a critical thing really.

Perhaps there’s another part to come, to say how things really end for as it is now, that’s a somewhat open-ended question.