A Review of Succubus by Richard Biggsley

The film is called Succubus, but I don’t really see one…

A Review of A Succubus for Christmas by Zayna Noble 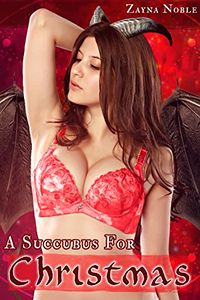 A Succubus for Christmas by Zayna Noble

Earlier this year, round about Halloween, I reviewed the book A Succubus for Halloween by Zayna Noble and you can find that review here on the Tale. I enjoyed the story, but I couldn’t find my way to giving the rating I wanted to give it for various reasons. One of the main ones came to wanting more character development for the main characters Bianca and Neil. I also wanted more told about Lala, who is a succubus that pops up in many of this author’s works.

For Christmas, the author returned to these characters to tell a story which I think was wonderfully fun, heartfelt and most of all, took the story of Bianca and Neil and moved it towards something I like to see. Turning a short hot flash into a story about love and relationships and what those in love will do for each other.

Because that, always, is a delight to see.

Since one fateful Halloween, Bianca has been living life as a succubus, a demon of lust. Gone is her scrawny, mousey body. Now she’s buxom, curvy, and elegant. That said, neither she nor her boyfriend Neil expected the effect of her little necklace to be permanent! Now, with Lala’s help, she has to learn how to shapeshift to trick her friends, family, and coworkers into thinking that nothing has changed at all. It’s particularly hard to pretend like her old self when her new demonic persona is much more lustful.

Neil is wracked with guilt. He feels that all of Bianca’s efforts are his fault, if only he’d paid attention to the fine print! He’s definitely getting more out of Bianca’s transformation; he has a hot girlfriend that’s all over him as soon as she gets home from work! Surviving her libido is one thing, surviving the holidays is another completely. Christmas is coming up fast and he has no idea what to get his girlfriend to make up for his blunder.

Thankfully, the magic shop owner Lala has a solution for him. If Neil becomes an incubus, he’ll be on equal terms with his girlfriend once again. The male equivalent of a demon of lust, he would be sacrificing a bit of his humanity to gain the body of an adonis and a package to match, and all he has to do is put on a little ring.

On Christmas Day, both Bianca and Neil will have sexy surprises for their partners…

Neil has issues to deal with and that isn’t going well for him. He thought things would be great with Bianca being a succubus, but things aren’t quite as he had hoped. Perhaps the worst thing of all being the guilt that’s been eating at him ever since. Hoping to find a solution to make things right, it’s back to Lala with the hope of a Happy Christmas for all, and with Lala’s help, that’s always possible.

This work, being a sequel to the previous work in the series, manages to tie up quite a few loose ends for the main characters Bianca and Neil. Neither is left out of the story and there’s quite a telling look into Neil’s personality, what Bianca means to him and how her transformation has effected him since it happened. There is an aftermath seen, the meaning of Bianca being a succubus and how much guilt Neil has been carrying with him since Halloween. This all means that both Neil and Bianca as characters are made to develop so much and be more than they were at the end of the prior work.

In many transformation stories, there’s no time spent in telling of how things have changed, what the impact has been on the lives of the characters outside of “just having a lot more sex”. This story delves into that aspect of things and that makes this work special by that alone. It is short, there’s a bit of skimming over some aspects of the pain that Neil goes through, how Bianca tries to make Neil see that she’s more than happy with her new self and needs him to be okay with it as well,

This brings Neil into seeing Lala once more and being offered a means to make things “right” again. That scene gives an inkling, dearly needed, into Lala’s personality, what drives her and more importantly, shows that in the end, sometimes what you need really is what you want. It’s only a question of being willing to pay the price for the happiness you want.

Once again, like the prior work, there is a transformation, this time it’s Neil’s, and when that comes to pass the erotica comes into the fore of the story. The heat is lovely, but it’s more the getting past the guilt that has been hovering over Neil and allowing the characters to be a couple, be in love and, finally, be who they are meant to be. A couple in love, their desires made real and the joy that comes from the passions they have for each other being allowed to be unbridled as they should be.

The work is a hot flash, being too sort for my liking, but in spite of this, the story told is romantic, caring and telling of who Bianca and Neil are. A couple in love with each other and finding their own kind of love and passion once more aflame. A delightful read, one that I think did both characters a service in letting their love come out over the erotica and tell the story beyond just sex and beyond the transformation itself.

I like that there is some closure for both Bianca and Neil, that their relationship remained true to each other regardless of what came. It’s nice to see the “what comes next” and have a happy ending to top things off. Perhaps we’ll see more of this couple, where things go from here. I do dearly love them both and seeing where this Christmas present takes them would be a delight.