Succubi Image of the Week 466

A Review of Angel’s Keeping by Brantwijn Serrah

A Review of Succubus Sundries by Zayna Noble 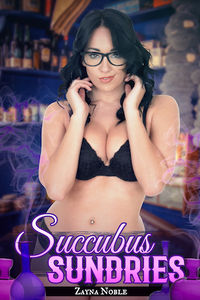 The first of two reviews today on the Tale of a book series called Succubus Sundries which I thought was a lot of fun. The main succubus character in this work, Lala, has appeared in some other series by this author and I’ll get about to reviewing them in the future here on the Tale.

I like Lala for her style, her bemusement and how she acts as a succubus as a whole. She wasn’t the central character in the story, but she made everything happen. I wanted to see a story about her alone, perhaps telling how she decided to get into the business she is in.

Having found another story with the same character appearing, I hoped that there would be more about Lala, who she is, where she came from. I wanted more than she being just “there” in the story and not much more. Regrettably, that didn’t happen in this work, but there is a story which had some promise in it nonetheless.

Abby has a crush but doesn’t have the confidence to take the next step. Her solution? She turns to a local potion and magic shop, owned by a sultry Succubus. Lala is more than happy to help Abby, helping her try out different potions and pieces of magical jewelry, each one transforming Abby’s body from one sexy form to the next!

From slender elf to busty neko and even to a generously-endowed lactating cow girl, Abby finds herself getting hotter and hotter. The thoughts of showing each of these new bodies to her crush excites her until she can’t take it anymore!

Fortunately for Abby, Lala the Succubus accepts a very different currency for their transaction…

Abby has heard tales of a store where a certain succubus can make dreams come true. Overcoming her shyness, she visits Lala and finds a succubus who is more than willing to help. Whether that’s trying to find what Abby wants, or if that’s what Lala wants is another question entirely. But it’s going to be fun to find out what, and who, comes next.

While Lala was only fleetingly in the prior series she appeared in, in this story she’s far more central, more involved and drives the plot forwards in a very seductive manner. She’s very much a succubus in how she toys with Abby, seduces her thoughts and then, when Abby’s quite literally on her knees, has her way with Abby. She’s not evil, really she’s mischievous, and I adored that very much.

Even though Lala is central to the story, her past isn’t told, her character doesn’t develop too far and by the time the story has to leave her behind, it’s unclear whether or not anything was learned about her as a whole. There are some lovely hints, which I dearly wish had been explored, but they aren’t seemingly important to the story and so they get passed over on the way to Abby’s seduction and the erotica that comes along with it all.

The erotica between Lala and Abby is a lovely, slow building up of sexual tension and I think that really worked well. It allowed Abby to explore what she wanted, to give Lala someone to play with. Both are well done, very hot and not as to be silly or seemingly wrong in some way. The transformation scenes are quite good, very detailed and I enjoyed them as well. Once the story turned towards Abby’s focus on why she visited Lala, the story moved very quickly through the climax, a very short erotic scene and the story comes to a close far too quickly I thought.

The writing is good, the characters are not cardboard, but Lala just didn’t develop as much as Abby did and I really wanted to see that. This is less a story about Lala as a succubus as it is a story about a series of transformations. Thus Lala could never really be the core of the story, but with all that the author told about her, she comes very close. I still want to know more about Lala, her past and so on. That could be a really good story on its own and still hope to see that sometime. But it didn’t happen here.

Lala was far more present in this work than the preceding series, which was promising, but really there wasn’t much in the way of her story being told, learning more about her. Again, like her previous appearance, she’s a tool for the transformation of the main character and when her role is over, she vanishes once more.

I still want a story about her, knowing more, telling more. That interests me because Lala seems to be very interesting on her own. Sometime the author should think about telling that story along with all else they are.

The second work in the series, Succubus Sundries 2, was published yesterday and I will be reviewing that work on the Tale next Tuesday… Hopefully it will open up Lala’s story more than it has been.