A Review of Succubus Sundries by Zayna Noble

Vindictus does have some interesting Succubus character skins…

A Review of Angel’s Keeping by Brantwijn Serrah 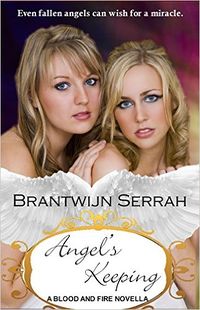 I think it is wonderful when a story is told about Succubi in which they discover something about themselves that never expected to be true. When you are told that you could never love someone, never care about someone, because of what you are, it’s hard to accept that it might not be the truth.

But Christmas brings with it, if not miracles, then a simple promise. One for the lover, one for the loved, and one of the truth. Accepting that truth sometimes takes one special soul to reveal that. Even if that takes a great deal of trust and understanding to bring it into being.

Why would the King of Incubi send one of his spies out on Christmas Eve? Unless it is to break her heart…

As a succubus, preying on humans is Raschael’s business, and mortal holidays are a frivolous waste of time. So maybe her king meant to punish her when he sent her out to hunt on Christmas Eve. Or maybe he just wanted her far, far away, so he could banish Raschael’s one trusted friend.

Your little pet has run off.

Now Raschael must track down a missing fallen angel, and she doesn’t have a clue where to start. Bigger predators are closing in, and Rasche’s only lead is a Christmas stripper named Noelle.

Rasche is a succubus who faces a world where she isn’t valued, where the idea of love is something that isn’t for her. But she has a joy in her life, one that makes all else bearable. Sent away to capture a soul on Christmas Eve, she is told that her joy has gone astray. A choice made, a need discovered and a truth is revealed that Rasche would never have imagined would be true.

What I thought was the most interesting part of this work was the time spent in telling the universe that Rasche lives in. The trials that she faces, the little bit of joy from Kyrie, how the two of them are, in a way, set again those around them that are… unkind… to put things mildly. By doing so, the author creates a strong emotional connection with Rasche and Kyrie and through this, when things start to go wrong, I found myself invested as a reader in why things were happening, but also how they were unfolding.

The relationship between Rasche and Kyrie is wonderful. While they cannot express the concept of love, of caring, of needing one another, it is clear they do, they simply must. Seeing how Rasche thinks about things, how her perceptions of the world are changed by Kyrie, how that offers one simple promise that she cannot ignore, that in itself makes the story so much better by far.

Rasche is a succubus, her true form is somewhat stereotypical, but she isn’t. That’s important and meaningful because without that, the rest of the work doesn’t have anything to connect to. While she is “ordered” to take souls, and otherwise, there’s a feeling that she’s unhappy about things, that there’s something that can change in her. It is that possibly, how it might be, that turns Rasche into one of the most fascinating Succubus characters I have read in some time.

The other main character, Noelle, was telegraphing who she was, what she represented, almost from the moment she appeared. She didn’t quite come out and say, but so many times there was this little cute expression of “I know something you don’t” which made her a wonderful companion to the events that Rasche faces in her search for Kyrie

There is quite a lot of erotica in this work, which consists of a series of hot flashes, but they aren’t meaningless. They speak of Rasche, of Kyrie, and in a way Noelle as well. There is emotion, love, joy and bliss, but also want, need and craving. Not simply erotica, the moments are complex in their emotional attachment and where that takes the characters in their journey.

If I had one concern about this work, it is how throughout the story Rasche and Kyrie’s names change from time to time. There are moments when in one sentence it is “Rasche” and in another it is “Raschael”. Sometimes it is “Kyrie” and sometimes it is “Kyriel”. It isn’t a huge issue, but it just seemed an odd thing to do so often.

A lovely, cute and passionate story, Rasche is a joy as are Noelle and Kyrie. Well written, full of passions, story, characters that have souls and are changed over the telling of the story that makes this something special. I wish there was more about Rasche’s past, that of Kyrie as well. Noelle’s reveal was cute, but left me wanting too. Perhaps this story isn’t over, there will be more told about them all and I think that’s a lovely Christmas gift to be… I hope.

A lovely, cute, but meaningful story in which the characters discover their truths and are the better for being so. I’d love to see more about Raschael, her love, and her world. While it might not be all that it should be, that doesn’t mean that it can’t be.

Because sometimes love does conquer all.