A Review of Lips of the Succubus by R. J. Skye

A Review of A Domination of Demons: A Paranormal Tale of Infernal Menage by Adriana Belle 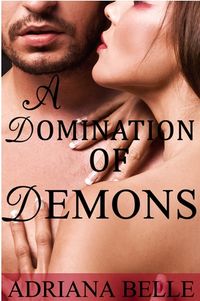 A Domination of Demons: A Paranormal Tale of Infernal Menage by Adriana Belle

Period pieces can be really quite amazing things. There’s a certain talent in being able to have one’s characters walk, talk and act as they should. Draping characters in the style of the time isn’t enough, there needs to be the backdrop to make things work.

Beyond the setting, the characters and the plot, there needs to be at least something as a reason why things happen. To rush through things, offer glimpses and not tell the story behind the story can be the single thing to draw the story back.

Being tempted by darkness is one thing. Being taken another. But leaving the why for it all unsaid leaves story alone to the side, not really heard.

Emma Banks has been pulling at the reins her whole life, running wild and defying her family’s wishes for her to find a nice suitor with a fat wallet. All she wants is to flirt with young men and make her own choices in life.

But when she literally runs into the mysterious, blue-eyed Tristan Adair, it sparks a forbidden desire in her to give in to her reckless side. She attends a séance at his invitation at the mysterious Crowley Manor, a place of dark rumors and witchcraft, where no decent young woman would ever be found…

She finds out more about Tristan than she could have dreamed, suddenly filled with the desire to be obedient to one man who can give her her heart’s desire. Marked by a strange symbol that has taken over her mind and body, giving in to the throes of uninhibited lust, she discovers an infernal world past her own…and the creatures of unearthly pleasures that lay just beyond that gate.

A calling brings Emma from her proper world into one that desires to set her free. The temptation of Tristan is clear for Emma. But there are more temptations lurking, calling to her. Which of them will she take and which shall take her will set her path forever.

The work is set and lives in a time where only proper things happen to proper women. That the calling of desire is not as important as the calling of status. The contrast between both is played off well here and sets up what is an unexpected story. While beginning with Emma looking to be free of her overbearing parents, the work falls into one of the most unique stories of supernatural encounters I have read in some time.

It’s a bit over the top in that, though the characters she encounters, who they are, makes sense in why the story turns as it does. While the erotica has heat, some meaning to it, there’s something missing along the way. While Tristan is in control of things, while there is clear evidence that he is so and more, that part of the story doesn’t get explored too deeply. More time is spent with Emma, her encounter and how she changes over the story.

The question remains however as to what really was happening, what Emma becomes and why Tristan is connected as he is. There’s a gap in the story, a missing point and this leaves something to be desired. Emma is interesting, her character develops and is transformed by the last page. But telling more of that isn’t part of this and that left me wanting.

The ending is a bit abrupt, not putting a really satisfying ending to the story. With all of the hints, the plot and the characters, the ending just didn’t work for me. There needs to be something more than what comes, something that explains Emma’s encounter and what it all means. It is, in the end, a mystery. One that is never really solved.

The single disappointment is the ending. A point at which something more could have been explored just isn’t. It’s a shame because there is a lot of things not explained, left open and incomplete. It’s much like Emma herself in many ways. Lost but seeking and unsure much of the time.